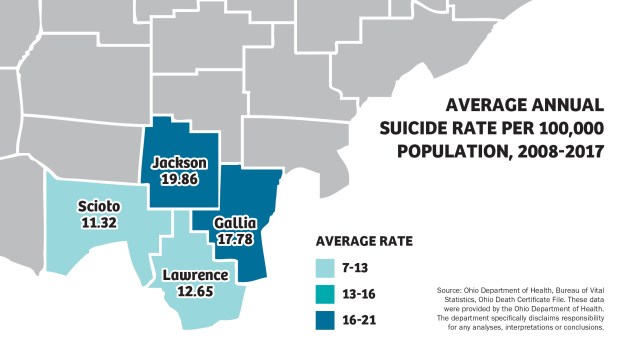 While that is below the United States average of 14 per 100,000 in 2017, a new national study has found that suicide rates are climbing in the nation and counties in the Appalachia region are most at risk, with rates highest in western states in the Rocky Mountain and in counties in Appalachian states.

For the new study, from The Ohio State University, which was released on Sept. 6, data was evaluated county-by-county across the U.S. for the period from 1999 to 2016. It was found that rates climbed 41 percent nationally, from 15 per 100,000 county resident at the beginning of the period to 21.2 per 100,000 in the final three years evaluated.

Overall, the counties with the highest rates were found in western states, including Colorado, New Mexico, Utah and Wyoming; in Appalachia, particularly in Kentucky, Virginia and West Virginia; and in the Ozark region, which includes Arkansas and Missouri.

In Ohio, the study found rates higher in the southeast portion of the state, particularly in the counties along the Ohio River.

Danielle Steelesmith, a postdoctoral fellow at Ohio State’s Wexner Medical Center and the lead researcher on the OSU study, said the high numbers in Appalachia were due to “deprivation.”

“It’s economic factors,” she said, citing the number of people on welfare and living in poor quality housing. “That was associated with rural areas. With the loss of certain industries, there were fewer jobs.”

Steelemith said the high rate in Appalachia during the period was likely tied to existing economic factors.

“It probably is,” she said, though she said the region may have had more trouble recovering from the last economic downturn than other areas of the country. “There are more rural areas that haven’t been able to recover.”

Steelsmith said other factors associated with higher rates included a high percentage of veterans in a county and lower rates of insurance coverage. While the study found that, in urban areas, counties with more gun shops tended to have higher suicide rates, she said this did not appear to be the case in rural areas.

Steelesmith said the key to reducing suicide would be to improve access to jobs and increase insurance coverage.

“So that people have access to the care they need,” she said, also citing the need to reduce the area’s isolation.

Steelesmith said she plans to expand on the study.

“We’ll dive more into rural areas,” she said. “And look at individual and county-level factors and different subgroups.”

The Tri-State region has been a cause for concern in other studies, with the Huntington-Ashland metro area in West Virginia, Ohio and Kentucky coming in highest in the nation for those saying they have experienced depression, according to a 2010 study by Gallup and Healthways. The study found that 32.1 percent of those surveyed said they have been diagnosed with depression.

Last year, the website Senior Living examined numbers from the U.S. Centers for Disease Control and found that the region had the third highest increase in suicides in the nation, seeing a 134 percent increase in 2017.

Locally, there have been several groups focused on the issue, with Impact Prevention, a nonprofit organization, kicking off a campaign in April by hosting a walk to raise awareness of suicide prevention efforts.

The walk was dedicated to the memory of County Commissioner Bill Pratt, who died in December 2018, and served as a lead in to several community events and ongoing efforts. At the same time, the Lawrence County Commission joined the cause by proclaiming April as Social Inclusion and Community Connectedness Month.

The Alcohol Drug Addiction and Mental Health (ADAMH) Board of Adams, Lawrence and Scioto Counties maintains hotlines for those in a crisis or contemplating suicide. The phone number is 740-354-1010 and a text hotline is also available by sending “4hope” to 741741.