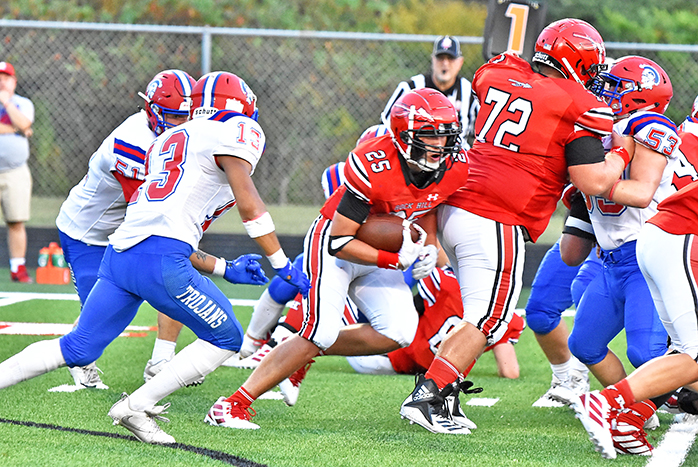 Paul Boggs
For The Ironton Tribune

PEDRO — Speed kills. So do turnovers at the most inopportune times.
For two-and-a-half quarters on Friday night, the Rock Hill Redmen matched the heavily-favored and visiting Portsmouth Trojans score for score.
Unfortunately for the undermanned Redmen, they were undone by two lost fumbles that led directly to 14 second-half Portsmouth points – and the Trojans’ Talyn Parker poured on 266 rushing yards and all five Trojan touchdowns in Portsmouth’s 40-28 Ohio Valley Conference victory.
The matchup marked the OVC opener for both clubs, as Portsmouth stayed undefeated at 4-0, while the Redmen remain winless at 0-4.
Rock Hill has suffered several injuries – some season-ending – over the course of the first four games, including starting senior running backs Zak Adkins and T.J. McGinnis.
Add to that MASH unit on Friday was fellow senior starting back Logan Hankins, who didn’t play in the second half due to suffering concussion-like symptoms.
But the Redmen gave an excellent effort against the talented Trojans, as their two tight end T-formation full-house offense moved the ball – often times at will.
However, Rock Hill fumbled the opening kickoff of the second half, as the Trojans recovered and scored four plays later to go up 24-14.
Then, late in the third quarter, the Redmen fumbled following an eight-play four-minute and 15-second drive in which they moved from midfield to just inside the red zone.
Following five plays of 10 yards or more, and only two minutes later, Parker posted his fifth and final touchdown – a 25-yard run to double the lead at 40-20 with 10-and-a-half minutes remaining.
“The final score doesn’t reflect how hard our kids played and how well we played at times,” said Rock Hill head coach Mark Lutz. “I thought we handled the line of scrimmage most of the game, which is what we tried to do. That’s the best our offensive line has blocked all year.
“We had kids out injured and we lost Logan Hankins early, then we’re playing (Talyn) Parker who is just lightning in a bottle. If you don’t tackle him, more than likely he is going to break one. He had two long runs tonight. Then we had two unfortunate turnovers at the wrong times, one of which set up a short field for them and the other we were driving the ball. We controlled the line of scrimmage, and there weren’t too many negative plays that we had. A loss is a loss, but our kids played hard and that’s all I can ask of them.”
The Redmen, which did not attempt a single pass, ran the football 55 times for a massive 302 yards and picked up 24 first downs.
Logan Hankins had 46 first-half yards and a touchdown on seven carries, but sophomore Owen Hankins and junior Hayden Harper carried 20 times apiece, as Hankins amounted 142 yards while Harper hit for 102 and two short touchdown runs (four and two yards).
Parker picked up his 266 yards on 16 carries, as the Trojans rushed 27 times for 331 yards as a team.
Drew Roe, Portsmouth’s sophomore quarterback, completed 11-of-17 passes for 137 yards – with Eric Purdy catching eight of Roe’s passes for 107 yards.
Roe rushed four times for 32 yards, as the Trojans did not punt, did not commit a turnover, and racked up 22 first downs.
The Trojans also converted all five of their extra-point tries – which were all two-point conversions.
Meanwhile, Rock Hill went 2-of-4 on two-point attempts, including a pass failure on its second touchdown with 4:16 remaining in the second quarter.
Harper capped an impressive 13-play, 66-yard, seven-minute and three-second scoring march with a four-yard plunge to make it 16-14, as the Redmen actually appeared to convert the subsequent two-point run attempt.
But a chop block penalty was called on the Redmen, negating the conversion and forcing Rock Hill to retry the PAT at the 17-yard-line.
The second attempt failed, but Lutz labeled the fumbling of the second-half kickoff as “death to us.”
The Redmen received the kick, but it bounced right off the return man –and into the arms of Portsmouth’s Reade Pendleton who recovered right at the 26.
Four plays and a minute and 49 seconds later, Parker cut up for an 11-yard TD run, as Roe completed the two-point conversion pass to Michael Duncan for a 24-14 advantage.
The Redmen returned to their ground assault, driving 65 yards and nine plays in four-and-a-half minutes, as Harper had his 2-yard run to trim the deficit to 24-20.
The two-point run attempt failed, and Parker burned Rock Hill with his second scoring run of at least 59 yards – a 69-yard scamper at the 4:38 mark of the third quarter.
On the game’s opening play, Parker broke about a half-dozen tackles on a 59-yard dash to the end zone – just 23 seconds into the contest.
Tyler McCoy made it 32-20 with his two-point conversion run, as the Redmen then moved the ball exactly 34 yards to the Portsmouth 17 before fumbling.
The Trojans recovered, and Roe completed passes to Purdy for 13 and 14 yards, sandwiched around 10 and 18-yard gains by Parker – prior to his 25-yard scoring sprint.
Roe’s two-point pass to Bryce Wallace officially doubled the advantage, which was Portsmouth’s largest of the night.
The Redmen made it 40-28 with a 14-play, 64-yard, seven-minute and 17-second scoring march that picked up five first downs and was capped off by a Hunter Massie 1-yard QB sneak.
Harper ran in the two-point conversion, as Logan Hankins had Rock Hill’s opening touchdown and two-point run – a 9-yarder to cap an eight-play, 68-yard drive at the 7:25 mark of the opening quarter.
That tied the score at 8-8, as Portsmouth never trailed, going ahead 16-8 just 40 seconds into the second quarter after a five-play, 56-yard drive that spanned a minute and 22 seconds.
Roe ran for 15 yards to move the Trojans into Rock Hill territory, as another Roe completion to Purdy for 40 yards set up Portsmouth 1st-and-goal at the 2.
Parker finished the drive on the next play, and ran in the two-point conversion run.
The Redmen return to OVC action next Friday when they travel to Fairland, while Portsmouth returns to the road – and returns to OVC play – at defending champion Gallia Academy.