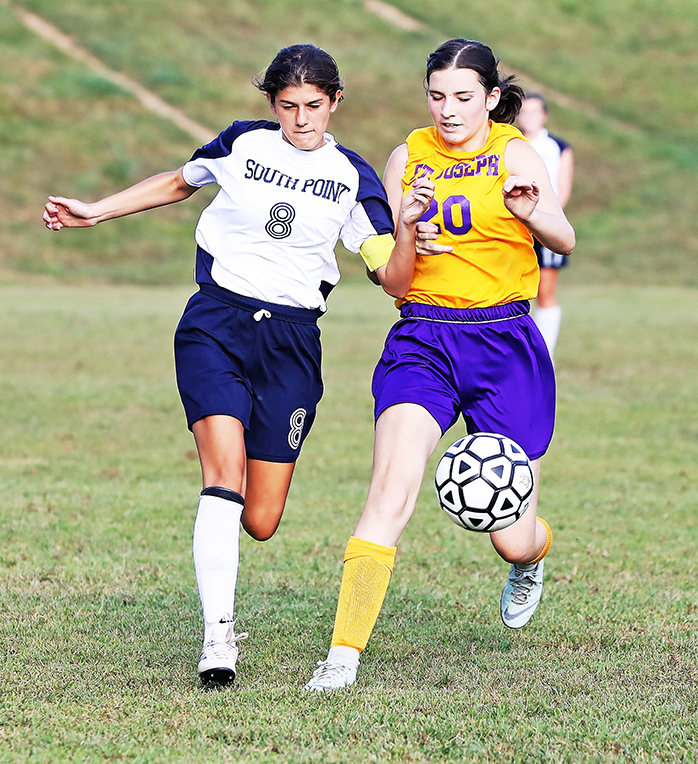 It was a numbers game for the St. Joseph Lady Flyers’ soccer team.
Despite playing with a limited roster, the Lady Flyers put up more numbers on the scoreboard than their opponents as they posted a pair of soccer wins.
The Dirty Dozen were missing Faith Mahlmeister with a leg injury and had the minimum of 11 players. Despite having no substitutes, they still managed a 6-0 win over the South Point Lady Pointers on Wednesday.
Although a little sluggish at first, the Lady Flyers picked up the pace quickly and scored on a penalty kick at the 9-minute mark when Emma Whaley made the kick from a hand ball in the box.
Bella Whaley got the next goal as she found the back of the net with an assist from Laiken Unger at the 13-minute mark.
Aubrey Sutton kept the variety of scoring going as she got an unassisted goal 28 minutes into the game.
With just 50 seconds left in the half, Unger got her own goal with a direct kick and it was 4-0 at the break.
Bella Whaley made it 5-0 with her second goal that came at the 48th minute and then Emma Whaley scored her second goal thanks to an assist from Chloe Sheridan at the 70-minute mark.
The Lady Flyers controlled the offense as they got off 18 shots compared to just four by South Point. Freshman goalkeeper Gracie Damron racked up 13 saves.
Next up on the schedule was a visit to Northwest on Saturday where the Lady Flyers were forced to play with only 10 available players against the Lady Mohawks’ 11.
Despite the handicap, the gritty Lady Flyers posted a 5-0 win over Northwest.
“You can’t say enough good things about these girls and their determination and grit,” said Lady Flyers’ coach Dan Blair.
“We have several games where we have had just enough to play and today we played with one less than our opponent and the girls showed what they are made of and what they can do.”
Emma Whaley again got the Lady Flyers’ scoring started just four minutes into the game as she drilled the ball into the net with an assist from Lydia Sheridan.
Sutton then scored with an assist from Emma Whaley at the 16-minute mark and it was 2-0 at the half.
The Flyers came out strong and scored five minutes into the second half as Kaitlyn Sheridan lofted a ball from 35 yards out that bounced over the goalie’s head and into the net.
Bella Whaley scored next with Unger handing out the assist with 60:00 on the clock.
Emma Whaley completed the game’s scoring using a beautiful pass from the corner by Sutton with one minute left to play.
St. Joseph (5-5-1) plays host to Portsmouth West on Monday.

CLEVELAND (AP) — Browns linebacker Christian Kirksey has been placed on injured reserve after suffering a chest injury against the... read more