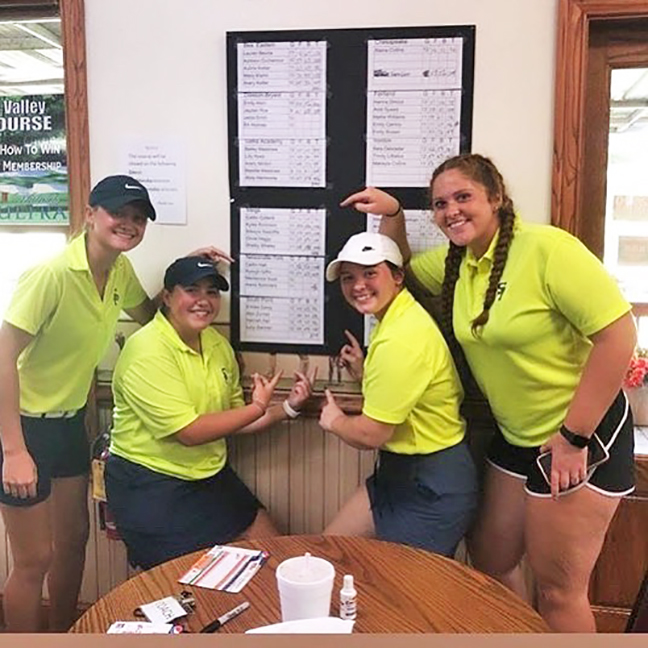 The South Point Lady Pointers won the Division II sectional golf championship on Monday and will now play in the district tournament on Tuesday at Pickaway Country Club in Circleville. Showing off their winning scorecard are team members (from left to right) Emilee Carey, Abbi Zornes, Lucy Gannon and Hannah Hall. (Photo Submitted)

JACKSON — The South Point Lady Pointers’ golf team one good round and will now get to play another round.
South Point won the tournament and was one of three teams to qualify for the district tournament along with Gallipolis and Meigs.
The district tournament will be held next Tuesday at Pickaway Country Club in Circleville. One team and one individual not on the qualifying team will advance to the state tournament.
South Point had a 379 team score to win the sectional tournament Monday at the Franklin Valley Golf Club. Gallipolis had a 394 and Meigs a 406 to advance as teams.
South Point’s total came from Abbi Zornes who shot identical rounds of 44 for an 88 total, Emilee Carey was 49-43 for 92, Hannah Hall 49-47 for 96 and Lucy Gannon 44-59 for 103.
Fairland Lady Dragons Hanna Shrout qualified for the district as she had a 37-38 for a 75 total to claim medalist honors.
Shrout was the sectional medalist last year with a 78 en route to a trip to the state tournament.
Lady Dragons’ Addi Speed was 53-51 for 104, Mallie Williams 55-61 for 116, Emily Carrico 77-69 for 146 and Emily Bowen 83-76 for 159.
Coal Grove Lady Hornets Emily Horn went 50-52 for 102, Jayden Roe 61-68 for 129, Jaida Smith 62-66 for 128 and Elli Holmes 66-60 for 126.
Chesapeake Lady Panthers Alaina Collins had a 96 (46-50).
The top three individuals not on a qualifying team also advanced. Besides Shrout, Collins advanced along with Horn who won a playoff against Minford’s Annie Lawson.
The Ironton Lady Fighting Tigers Trinity Littleton (57-63=120), Bella Delawder (62-59=121) and Makayla Collins (53-73=126) all competed in the tournament.
Division II Southeast District
Girls Sectional Golf Tournament
Team Scores
South Point 379
Gallipolis 394
Meigs 406
Fairland 441
Vinton County 484
Coal Grove 485
Beaver Eastern 522