Ironton must avoid letdown against Pointers 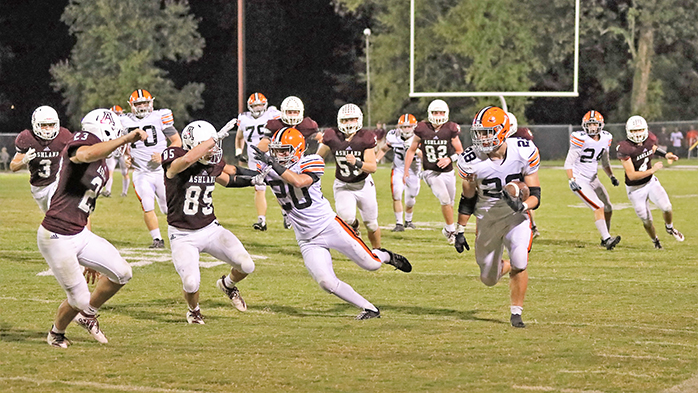 Ironton Fighting Tigers’ running back Reid Carrico (28) gets a big gain against the Ashland Tomcats’ defense during last Friday’s game. Ironton looks to bounce back after losing 16-10 in overtime for its first loss of the season. (Photo By Tim Gearhart)

This week will be a mystery.
The Ironton Fighting Tigers visits the South Point Pointers and there is plenty of mystery surrounding the game for Ironton.
One, how will Ironton react after losing for the first time this season.
Mystery No. 2, the fact it was an emotional game against the rival Ashland Tomcats will challenge Ironton to get prepared for a team that is 1-3 on the season.
Mystery No. 3, what to expect from South Point.
Despite the record, the Pointers have played well in each game but have hurt themselves with penalties and turnovers.
The Pointers moved the ball at times against Coal Grove in last week’ 25-7 loss and were in the red zone twice but failed to score, each due to an interception.
And that leads to yet another mystery. The Pointers started Malik Pegram at quarterback last week and switched to previous starter Alex Lambert later in the second half.
So, how do you prepare?
The Pointers (1-3, 0-1) have some solid skilled players with senior tight end Larry Fox (6-2, 220), wide receivers Chance Gunther (5-10, 150) — a senior — and Pegram, and their running backs in sophomore Maddox McCallister (5-10, 165) and senior Jeremy McMillian (6-0, 200).
The offensive line returns from last season with junior Bennett McCallister (5-11, 225) at center, seniors Grant Gifford (6-2, 265) and Thomas Duna (5-9, 200) at the guards, and seniors Brody Thompson (6-4, 330) and Ryan Fetty (5-19, 190) at the tackles.
Ironton (3-1, 1-0) needs to keep winning for obvious reasons.
First, the Fighting Tigers must keep pace in the Ohio Valley Conference race and, second, they are currently tied with Minford for first place in Region 19 of the Division 5 computer playoff ratings.
Other OVC teams still unbeaten include Gallipolis and Portsmouth whom Ironton must play in weeks nine and 10, respectively.
Ironton leads the series against South Point 22-3 with one loss a forfeit in 1944. The other two losses were in 1962 and 1966.

CINCINNATI (AP) — A sizzlin’ September topped off by a frothy celebration. Nobody does it better down the stretch than... read more