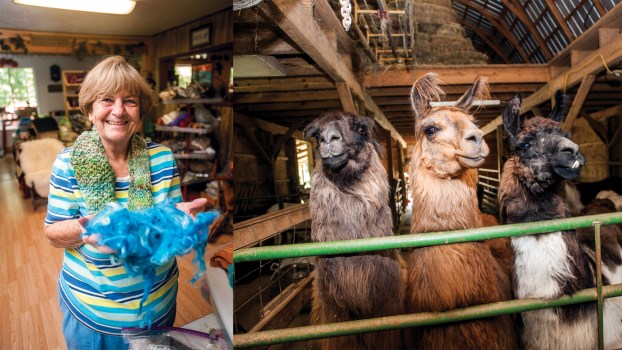 Judy Ross, of Back Porch Fibers, sells yarn and other products made from the hair of animals on their farm. (The Ironton Tribune|Jessica St. James)

BRINGING THE FARM TO YOU: Llamas help Chesapeake farm sell fibers to the public

For the past 22 years, Judy and Tom Ross have been raising llamas on their property in Chesapeake.

And, for the past six years, the couple has made the most of it, through their two businesses, Good News Llamas and Back Porch Fibers.

The Rosses have 16 llamas and two alpacas on their hillside farm, and, once a year, they shear the animals and, using the hair, make a variety of products, from yarns, to clothes, to scarves, to handbags. The couple will be at the Bringing the Farm to You event at the Lawrence County Fairgrounds on Saturday.

The herd is descended from the original two animals they purchased in 1996, one of which, Emily, they still have.

Tom handles the animal side of the business, while Judy focuses on the products produced from the llama’s hair, dying it and spinning on her wheel.

“Everything from Back Porch Fibers is processed on our farm,” she said. “It’s hand-spun, dyed. It’s all done right here.”

The couple had raised other animals before, such as boxer dogs, and Tom remembers when he first encountered the animals at an event.

“There was a sign that said ‘Come see the llamas,’” he said. “I ended up spending about two and a half hours there.”

After purchasing their first two from Hank Kaufman of Timber Wind Llamas of Johnstown, Ohio, they built a specially-designed barn with a high roof to house the animals. Tom said the added height creates more shade, since the llamas, native to South America, are not fond of hot temperatures. He said on hot summer days, they prefer to stay indoors, where there are fans, but, when subzero temperatures occur in winter, they are completely comfortable outside.

He said they enjoy raising the animals more than any other.

“I’d rather have llamas,” he said. “They’re so docile and quiet. They hum, but that’s about it.”

As for the spitting llamas are known for, which can have a range of up to 15 feet, he said this only occurs when they feel threatened.

“Do chickens peck? Yes,” he said. “But a llama won’t spit unless you upset it.”

Tom said the animals, which are “cousins to a camel,” require less to feed them than some animals.

“It takes one-third as much to sustain a llama as a cow of the same age,” he said.

Tom has extensively researched the animals, which he says are used primarily for pack purposes.

While some eat llama meat, he said it is not their most common purpose.

He says the animals, due to the nature of their hooves, are the only one permitted to walk on the entirety of the Appalachian Trail.

The animals have a good-sized run of the land and hill on the property. Having multiple stomachs, they subsist on the large amount of hay in the barn, as well as grass. However, due to lack of nutrients in the region’s soil, Tom said they also give them a supplement of feed.

The couple takes the animals with names such as “Resounding Joy: and “Tizzy” (short for “Tis so sweet to trust in Jesus”), to events throughout the regions, such as Senior Day at the Lawrence County Fairgrounds, local nursing homes, schools and foster homes.

“Some of them have been photographed thousands of times,” Judy said.

The couple used to take them on the road to shows and fair, where they were ranked some of the top animals in the country.

Now, they focus more on products from the animals. Judy dyes the hair in a variety, getting shades ranging from browns to brilliant sky blues. In addition to clothing items, she produces felt arm from the scraps of fabric she makes.

“You can make the neatest yarns,” she said. “They’re very popular. I sell as many as I can make.”

The yarns are sold at specialty to shops throughout the region, and the Rosses attend craft and art shows as well.

“You can spin from anything,” Judy says of the wheel in her home, noting that hair from goats, and yaks are also popular. She said she’s even had someone request to her to spin hair from their sheepdog.

Tom said the llamas are well, behaved. While very attentive, he said they can also be a little “aloof.”

“They’re kind of like a cat,” he said. “Sometimes they want to be petted. Other times, they’re not interested in being touched.”

Judy said she find the animals, which they’ve allowed into the house, to be calm and says watching them can be “therapeutic.”

For more information on Good News Llamas and Back Porch Fibers, visit www.goodnewsllamas.com.

BRINGING THE FARM TO YOU: Tarheelbilly Farm offers diverse range of products

WILLOW WOOD — For the past several years, Ben and Charis Walker have been running Tarheelbilly Farm in Willow Wood.... read more