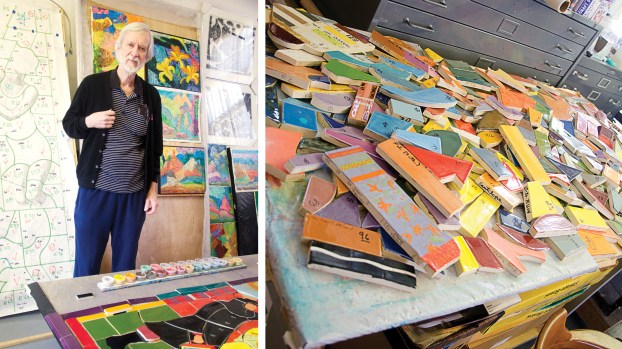 Former Marshall University professor Robert Hutton, of South Point, is seen in June, next to a portion of his in-progress mural depicting the history of the university lab school. The mural will be unveiled in a ceremony at Jenkins Hall at the school on Friday. (The Ironton Tribune | Heath Harrison)

HUNTINGTON — A large, 440-tile mural, portraying the history of Marshall University’s lab school, is set to be unveiled on Friday.

The 13×7-foot piece, by artist Robert Hutton, shows the history of the school and will be unveiled at a ceremony marking the re-opening of Jenkins Hall, starting at 2 p.m.

Hutton, who owns and runs the Hutton Wayfarer Gallery in South Point, along with his wife, Robin, worked on the commissioned piece for three and a half years.

He is a professor emeritus with the school, having taught fine arts for three decades before retiring in 1999.

Hutton will speak about the work at the event, which will also include a tour of the remodeled building.

The Huttons are also featured in the new issue of Tri-State Living which is out now.

Don’t smoke them if you got them: VA bans all smoking on their property

The Hershel Woody Williams VA medical center in Huntington, West Virginia recently banned smoking at its facilities and that is... read more