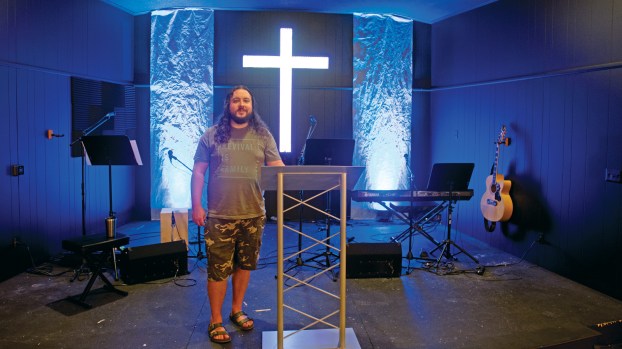 Joshua Davis, an associate pastor at IMPACT Church, stands in the sanctuary. (The Ironton Tribune|Mark Shaffer)

Ironton’s newest church wants to bring change to the community.

IMPACT Church opened in April and banners in the sanctuary spell out the message of the church: Community, character and culture.

“We want to see Christ making a difference, not only in individuals, but in the whole community and in the culture,” said Joshua Davis, one of the church’s associate pastors. “That is something that we are something we are really believing to see here in Ironton.”

He said they have really been impressed with the Ironton Ministerial Association, which puts on numerous events, the most noticeable of which is the National Day of Prayer event which is held on the lawn of the Lawrence County Courthouse to pray for government leaders, families, those in the military and more.

Davis pointed to his shirt that reads, “Revival is family,” as another point of the church.

“It is about broken families coming together and being made whole,” he said. “We are really about blended families and single parent families.”

He said the church doesn’t care about who makes up the family, that they “just want to see Christ glorified and working in people’s lives. That is the ultimate form of revival.”

David Amos is the pastor of IMPACT Church and Davis said that one of the things he is passionate about is restoration.

“He has experienced the devastation of sin in his life and saw that although at one point he counted himself out to ever be a minister because of his sin, God basically said, “Too bad, I love you that much anyway,’” Davis said. “He knows that God can turn around anyone’s past for His present glory.”

Besides Davis, other associate pastors include Rick Skeens, who is over administration and Kevin Carter, who moved from Texas after the spirit moved him to pack up and come to Ironton to grow IMPACT Church.

“So, we have a lot of pastors for one church, but the point is to make an impact,” Davis said.

Davis was “radically” saved when he was still a teenager.

“I guess it is radical when anyone is saved, but I got radically saved when I was 15 years old. I will be 35 in November,” Davis said. “Right away, I knew my passion was for other people experiencing the freedom I had experienced. I felt pastoring would be off in the future.”

He had preached “here and there” and led prayers at several places including Intersection Church in Ashland, Kentucky and much of it was at First Baptist Church Russell.

He said his goal is reach out to the schools and try to be a part of the Fellowship of Christian Athletes.

The church also goes door to door to invite people to attend.

IMPACT Church has services at 11 a.m on Sundays and is located at the corner of Sixth and Pleasant streets in Ironton.

SPE initiative emphasizes positive: School one of many undertaking initiative