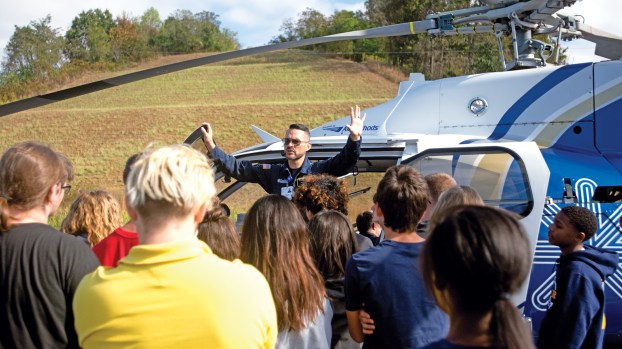 On Friday at South Point High School, there was a job fair, which sprawled out from the gymnasium, where there were 20-30 booths, onto the back parking lot, where students gathered around a medical helicopter and a U.S. Coast Guard fast response boat.

The event was set up by South Point High School senior Delaney Dickess, who is also the senior class president.

She said she started organizing it back in June after talking to principal Dean Nance.

“I realized that not a lot of people in my class, and in the classes under me, really knew what they were going into, because there are so many fields out there,” she said, so she set up a job fair so seniors could talk to people in fields they might be interested in.

She and Nance talked about it over the summer and picked out a day for it. Then Dickess had to call various companies and agencies and set it all up. Those that agreed to attend included the U.S. Coast Guard, the Ohio State Highway Patrol, the U.S. National Guard, an officer and a forensic investigator from the West Virginia State Police, HealthNet Aeromedical Services and the Huntington Police Department. There were also nurses, graphic designers, teachers, marketing specialists, speech therapists, counselors, pharmacists, a mayor, social workers, insurance agents, attorneys, a civil engineer, an X-ray tech, a realtor, a doctor, a dietician and a K-9 police unit.

“We had 30 different vendors and over 40 people,” Dickess said. “It was tough coordinating it all. I got nervous having to call and talk to people. It turned out much bigger than I thought it would be.”

Dickess plans to go to college and be a genetic counselor, which is someone who looks at people’s genetic material and can tell them if they are likely to get certain diseases or if their children have the possibility of being born with a genetic disorder.

And no, there were not any genetic counselors at the job fair.

“I didn’t invite one. I have already talked to one and I was pretty sure that I’m the only one in my class that is interested in that field,” Dickess said.

Principal Nance said that he agreed to let Dickess organize the event because he felt it was something that could benefit the senior class when it came to colleges or careers.

“One of the things I try to stress to my kids is that if you pick a career that you enjoy, they say you never work a day in your life,” he said.

Part of the emphasis was careers that may not necessarily require four years of college.

“I said that she should get a list of names and if she could get 15 together, I would permit her to do this,” Nance said. “As you can see, it was much bigger than 15. And a lot of local businesses were represented and they are always looking for employees and this was a good way for our students learn what they did at their business. Delaney did a great job and we are very appreciative of all the businesses that showed up.”

Although the job fair was originally just intended for the senior class, Nance decided to open it up to all the junior, sophomore and freshmen classes as well, since there was such a diverse group of businesses set up.

“We just hope that this touches some of the kids’ lives and opens them up to a direction of what they might want to do,” Nance said.

One of the students who was checking out of all the booths was junior Olyvia Stout.

“I am trying to learn different careers I can go into, starting in college,” she said. “I’ve been around to almost every area and I’ve learned a lot of information.”

The field that she found most interesting was early childhood development.

“I love working with kids and the main career I want to go into is music education,” she said. “Teaching kids creativity is very important.”

She also found one on speech therapy interesting as well, because she wants to be an interpreter for the deaf and has been learning sign language.

SOUTH POINT — Workers and local leaders were inviting to the Lawrence County Chamber of Commerce on Thursday where the... read more