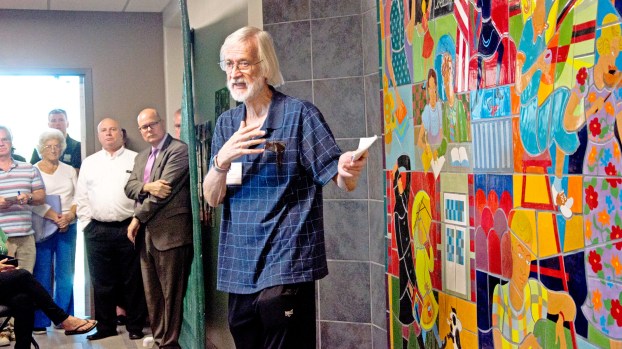 HUNTINGTON — On Friday, Marshall University hosted the grand reopening of Jenkins Hall and the events served as a long-awaited unveiling of work from a South Point artist.

Professor Emeritus Robert Hutton, 80, was a fine arts instructor for three decades, retiring in 1999, and the Marshall Lab School Alumni Board had commissioned him to create artwork illustrating the former school, which was housed in the hall through 1970.

The creation of the work, which measures 13×7 feet and is comprised of 440 hand-glazed tiles, took him three and half years to complete, with the final piece fired in June.

The building has a special meaning for Hutton. Not only did he teach there early in his career, but it is also where he met his wife, Robin. The two own and operate the Hutton Wayfarer Gallery in South Point.

Displays next to the work, which was hidden by barriers at the beginning of the event, provided photos detailing the long process of producing the work. Hutton had to create a large chart as a key to keep the work coordinated, and it required him to build a recipe book for the glazes, so that he could replicate colors for the tiles.

Alumni were invited to glaze tiles that were used for the work’s border.

In addition to the unveiling, the event also served as a reunion for the lab school, with past alumni and faculty invited. Yearbooks photos and other memorabilia were on hand for them to peruse.

“We are excited by this,” Teresa Eagle, dean of the College of Education and Professional Development, which now resides in the building, said of the unveiling. She said she had pressed for artwork to be installed within the building, rather than outside. “This shows students what the lab school was like and the main reason the building was built.”

Hutton advised the gathering that when taking in the work, which he said was “complex” — it features 15 figures, including students, a teacher, an athlete and a cheerleader — to take the time to take in the narrative being told.

“When you look at a work of art, you have an experience,” he said.

The lab school was used for teacher training, serving students from elementary through high school grades. It launched in the 1890s, then moved into Jenkins Hall in 1938, which was built by the federal Works Program Administration during the administration of President Franklin Roosevelt.

Marshall University President Jerome Gilbert, speaking at the ribbon cutting before the unveiling, said Jenkins Hall was the oldest academic building on the campus and that the renovations, which began in 2013, ensured it will continue to be used for generations.

“We have a great appreciation for the past and history associated with it, but this building is now about the future,” he said.