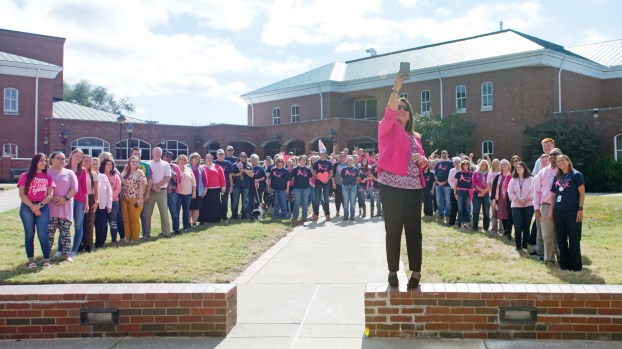 Nicole Pennington, dean of Ohio University Southern, takes a selfie with the 250 people who showed up to take part in the Pink Wellness Walk and formed a human pink ribbon for breast cancer awareness on Thursday. (The Ironton Tribune|Mark Shaffer)

On Wednesday, the sidewalks of the Ohio University Southern campus were covered with graffiti.

But it wasn’t the mean kind; rather it was pink ribbons and sayings in support of the school’s Pink Wellness Walk in support of breast cancer support — sayings like “Fight!” with a heart in the exclamation mark, “Don’t Give Up,” “With Hope Anything Is Possible,” and the John Wayne quote, “Courage is being scared to death and saddling up anyway.”

At 12:30 p.m., OUS students, faculty and staff, the Ironton Pep Club and members of the community began flooding into Shafer Courtyard to line up and have their photos taken as a human pink ribbon for cancer awareness.

And in the center of the ribbon was Kelly Hall, the director of OUS’s Equine Studies.

In April, she was told she had cancer and Thursday was a milestone for her.

“Today was my last round of chemo treatment,” she said happily.

Event organizer Tina Canter, Wellness Champion for OUS and executive assistant to the OUS Dean Nicole Pennington, said they were hoping for around 100 people. Around 250 people showed up.

Hall said she was surprised by the size of the crowd.

“I am so thankful, everyone has been so good to me during all this,” she said. “Everyone supported me and looked out for me. To have this many people turn out for me was fantastic. There are a lot of women fighting bigger battles than I am and they need our support.”

Canter said she organized the event in part because of Hall’s diagnosis and getting the word about how important it is to get the word out about being tested for breast cancer.

“I am extremely happy to see the turn out, especially with all the Ironton High School students,” she said. “I think it was very nice of them to support this.”

Pennington said she was excited to see the turnout and took a selfie with the crowd.

“It’s not only to raise awareness, but celebrating Hall’s last day of chemo treatment,” she said. “I think this is something we can grow every year. We want women to be aware of this because we know that every two minutes a woman in the United States is diagnosed, that is why it is so important to get the screening and mammograms.”

Hall said that she was lucky in that her breast cancer was caught early.

“Early detection is so important. Women need support to be able to get those tests and mammograms done, so it is treatable, before it gets too far,” she said.

WNF to have prescribed burns: Goal is to promote biodiversity, encourage growth of oak trees

PEDRO — Starting next week, the Wayne National Forest will be having prescribed burns in an effort to promote plant... read more