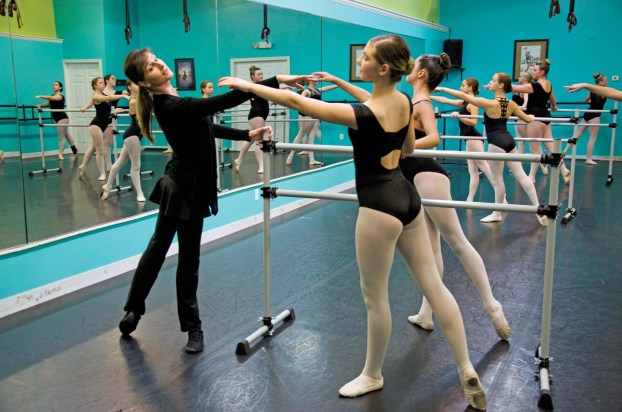 Alisa Bolanitkova, audition tour director for the Moscow Ballet, teaches a master class for senior level dancers on Thursday at Ashland Regional Dance Theatre. Bolanitkova will audition and rehearse more than 70 local dancers today for “The Great Russian Nutcracker,” which will be performed at the Paramount Arts Center on Friday, Dec. 13. (The Ironton Tribune | Heath Harrison) 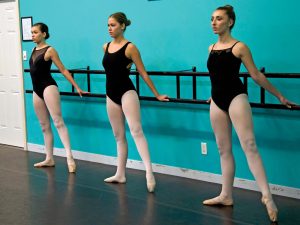 ASHLAND, Ky. — Dance students from around the region will be auditioning today for parts in The Moscow Ballet’s “Great Russian Nutcracker,” which is set for the Paramount Arts Center on Friday, Dec. 13.

According to Maria Whaley, director of Ashland Regional Dance Theatre, more than 70 local dancers will join the company’s award-winning dancers when they bring the show to the Tri-State.

“This is our eighth time doing it,” Whaley said. “We started with the Moscow Ballet in 2001 when the Paramount was renovated and it was our opening show.”

Preparations for the show began this week, when Alisa Bolanitkova, audition tour director for the Moscow Ballet, arrived in Ashland on Wednesday.

She will be auditioning and rehearsing dancers of all ages for parts in the production. On Thursday and Friday, she taught a master class for senior and junior level dancers at the Ashland Regional Dance Theatre.

“We are bringing the Great Russian Nutcracker to more than 140 cities in the USA and Canada,” Bolanitkova said. “And we are looking for local kids to dance with us.”

She said she first danced in “The Nutcracker” in her school’s production when she was five years old.

“So it’s always been a part of my life,” she said. 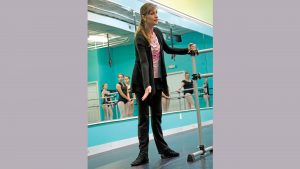 Based on the story “The Nutcracker and the Mouse King,” by E. T. A. Hoffmann, the ballet was choreographed by Marius Petipa and Lev Ivanov and featured a classic score by Pyotr Ilyich Tchaikovsky. It was first performed in 1892 and, in the 1960s, saw its popularity surge in the United States.

Bolanitkova said there are several variations on the ballet, such as the Spanish adaptation, but the overall story, Christmas theme and music by Tchaikovsky remains the same.

In 2012, the company had one particularly famous child join them on stage for the “Dance With Us” program, when President Barack Obama’s daughter, Sasha, took the part of a mouse in the production.

Bolanitkova said some of the roles that go to local children and teens include party children, mice, snowmaidens and snowflakes.

She said, as the auditions take place, she looks for different combinations from the dancers’ performances.

“It’s about passion,” she said. “Everyone is different and we see what is best for them.”

She points out the different styles of dance involved.

“Russian is very open, Arabian is slow and Chinese has many tiny steps,” she said.

Whaley said the tour directors from the Moscow Ballet, who visit each time the show comes, also know what the company has in terms of costumes.

“They know what kids will look good in a part,” she said. “They have a very trained eye.” 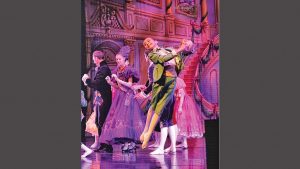 The Moscow Ballet will present “The Great Russian Nutcracker” at the Paramount Arts Center on Friday Dec. 13. As part of the company’s “Dance With Us” program, more than 70 local dancers will have parts in the production. (Submitted photo)

She said the company “preserves and presents the gift of ballet to the world.”

“They give a Russian flavor to everything, the scenery and the costumes,” Whaley said.

Whaley said the auditions are open to dancers beyond Ashland Regional Dance Theatre, and she has received interest from those as far away as Lexington, Kentucky.

Following auditions, the local dancers will rehearse again with Bolanitkova on Sunday, Whaley said. Then they will have 10-12 rehearsals over two months. On the day of the show, they will meet the visiting company for the first time.

“The kids report at midday and they rehearse with the Russians,” Whaley said. “It’s the coolest experience.”

The show will take place at 7 p.m. that evening and tickets are available by visiting the Paramount box office, calling 606-324-0007 or going to www.paramountartscenter.com.

For more information on the production, visit www.nutcracker.com.