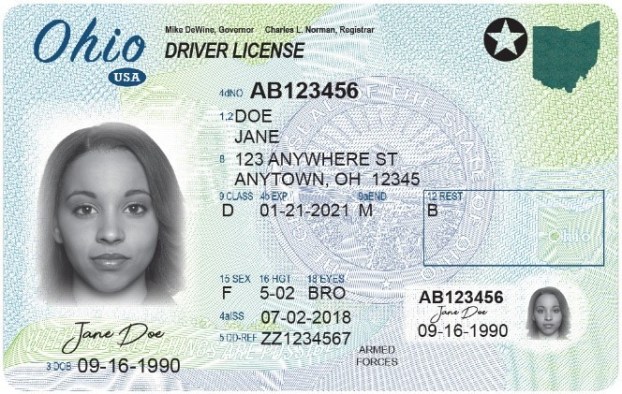 “We want to make sure Ohio travelers are aware of the upcoming change in the law and have ample time to get their federally compliant license or identification card if they need one,” said Governor DeWine.  “Our goal is to eliminate headaches and frustration at Ohio’s airports so that our citizens can quickly get where they need to go.”

The new federal requirements are part of the 2005 REAL ID Act which Congress passed following the Sept. 11, 2001, terrorist attacks. The strengthened federal requirements standardize the process of issuing driver’s licenses and identification cards throughout the country to prevent identity theft and fraud. Federally compliant cards include a number of enhanced security features and are marked with a black star in the righthand corner.

Ohioans who choose to obtain a compliant new or renewed license or identification card will be required to provide documentation at a deputy registrar location proving their name and date of birth (such as a birth certificate or passport), Social Security number (such as a Social Security card or most recent W2), and two additional documents proving residential address (such as a utility bill or bank statement). Those who have changed their names must also provide a certified marriage certificate, divorce decree, U.S. passport, or court order with their legal name.

The Ohio BMV has a full list of documents that Ohioans can use to obtain a compliant driver’s license or ID at www.bmv.ohio.gov.

Tuesday Ag Society Meeting The Lawrence County Agricultural Society will have its monthly meeting at 6:30 p.m. at the Lawrence... read more