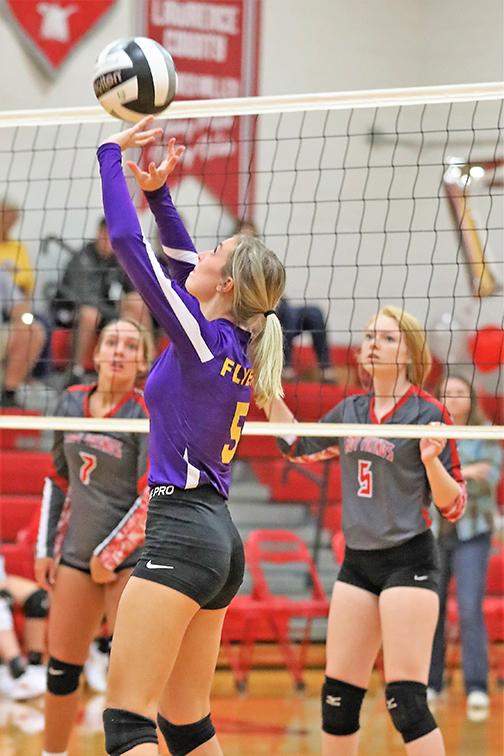 WILLOW WOOD — The St. Joseph Lady Flyers had plenty of defense to go around. The problem was trying to find the offense.
The Lady Flyers turned in another good defensive effort but still lost a hard-fought, straight sets volleyball game to the Symmes Valley Lady Vikings in the Division IV sectional tournament on Monday.
The Lady Vikings put together a solid all-around performance to win 25-23, 25-13 and 25-19.
“We always manage to play well defensively which shows in our stats. We get a couple of blocks here and there, but we usually have a lot of digs,” said Lady Flyers’ assistant coach Rachel Harries.
“Tonight, we had a team total of 62 digs which is great, but when you don’t have a good offensive game going, then you struggle. That’s what happened tonight.”
Harries said the Lady Flyers played well but said the Lady Vikings deserved to win.
“We finally did get some good swings in, but it was a little too late. Hats off to Symmes Valley because they did attack the ball about every play. They’re a pretty solid team and have some good fundamentals,” said Harries.
Jade DeGiorgio had 16 digs, Jadyn Green 15 digs, and Chloe Sheridan and Bella Whaley nine digs each to lead the Lady Flyers’ defensive effort.
The St. Joseph game statistics are:
Emma Whaley five digs’ Jade DeGiorgio 3 aces and 16 digs; Chloe Sheridan one ace, one kills, seven assists and nine digs; Faith Mahlmeister three kills and four digs; Gracie Damron one ace, four kills, one solo block, one block assist and two digs; Bella Whaley nine digs; Emilee Blankenship one dig; Aubrey Sutton one dig; Jadyn Green one ace, two kills, one block assist and 15 digs.
“Our girls played tough and they always do. We wished we could have had more success this season, but his is an extremely athletic and talented group of girls and their potential is as high as they want to reach,” said Harries.
Symmes Valley plays at 6 p.m. on Thursday at Racine Southern in the sectional finals.

Staff Report MINFORD — The Minford Lady Falcons are moving on in the sectional tournament, but it wasn’t easy. The... read more