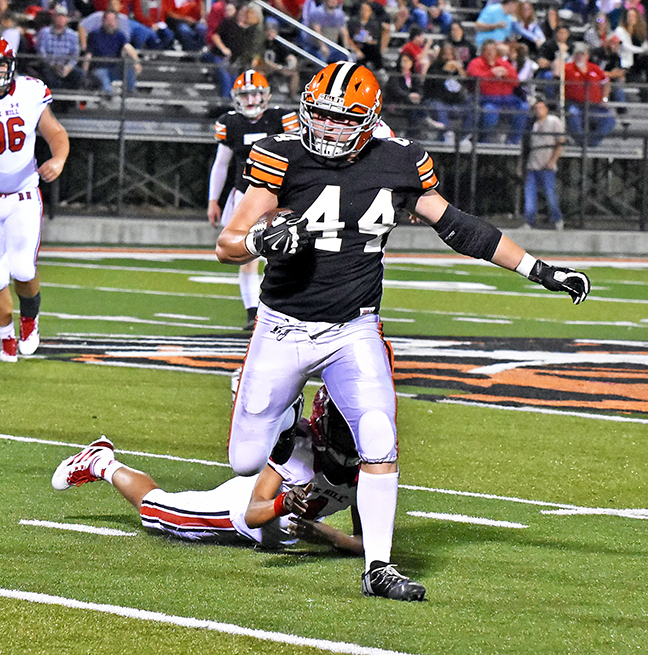 The records might not reflect it, but there are a lot of similarities between the Ironton Fighting Tigers and Coal Grove Hornets.
The similarities and differences will be in the spotlight on Friday when the Fighting Tigers visit the Hornets in an Ohio Valley Conference game between backyard rivals.
This year, a dominating defense and big-play offense has been the keys as Ironton is 6-1 on the season and tied with Gallipolis atop the conference at 4-0. Ironton needs to win and set up a showdown next week at Gallipolis.
Coal Grove was racked by graduation and is rebuilding under first-year head coach Jay Lucas. The Hornets were 2-5 and 1-3 in the OVC.
Both teams have an athletic quarterback and like to mix the pass in with the run. Ironton features Youngstown State commit Gage Salyers and Coal Grove has senior Cory Borders.
However, both teams are run oriented with Ironton relying on junior tailback Reid Carrico and senior fullback Seth Fosson and the Hornets going with junior fullback Austin Stapleton and senior tailback Austin Stormes.
But there are a couple of key differences. Ironton is a veteran team that has one of the area’s best defenses.
And there is that matter of the kicking game with the strong placekicking and punting leg of Avery Book. Coal Grove has been working with a couple of untested kickers in J.C. Damron and John Turner.
Up front the Hornets are led by junior Ben Compliment (6-2, 240) who plays tackle and is the up man in the Oak Tree offensive formation.
The center is junior Kye Robinson (6-0, 220), the guard seniors Reece York (5-9, 245) and Justin Castle (5-9, 220), and junior Chris Wilson (5-9, 250) rotating in at right tackle and junior Jeremiah Rice (5-10, 210) the other tackle.
The tight end is sophomore Perry Kingery (6-2, 180) and the wingback is sophomore Malachai Wheeler (5-8, 155).
The receiver positions are split between senior Joe Abrams (6-1, 170), senior Justin Hicks (6-2, 170), sophomore Jarren Hicks (6-1, 160) and freshman Chase Hall (5-8, 155).
Defensively, the Hornets have Castle, freshman Brad Wheeler (5-10, 200), York and sophomore Logan Sizemore (5-10, 180) up front while Compliment and Stapleton are the inside linebackers.
The outside linebackers are Abrams and Hall with Wheeler and Stormes the corners and Borders the safety.
As for the short history between the two teams, Ironton leads the series 7-1 but the past four seasons have been tough games.
After winning 13-6 in 2015, Ironton was the underdog and managed to get a 14-12 win in 2016. The Fighting Tigers won the OVC each season.
Coal Grove got its first win in the series in 2017 with a 28-7 win during an 11-2 season for the Hornets that included a league title.
Racked by injuries in 2017, Ironton was healthy and full of veterans in getting a hard-fought 21-12 win last season.

Bengals expect top CBs to be out

CINCINNATI (AP) — The winless Bengals expect to be without their top two cornerbacks when they host Jacksonville, the latest... read more