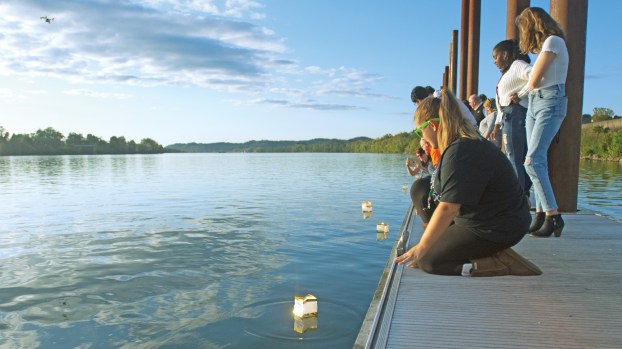 Members of Impact Prevention watch as luminaries, with positive messages written on them, float down the Ohio River at the boat dock in Ironton on Tuesday night. (The Ironton Tribune | Mark Shaffer)

As the sun was setting on Tuesday evening, members of Impact Prevention and the community gathered at the boat dock in Ironton to launch luminaries with positive messages into the Ohio River.

“We are here to help promote positivity,” explained Meghan Joseph, a prevention specialist with Impact Prevention. The group is a non-profit organization geared towards creating connections within the community and helping kids develop skills to make healthy choices about drug use.

She said people could write a positive statement or a wish on the luminary before it was launched.

“It is their why,” Joseph said. Hers said “I want to make the world a better place for my dogs.”

Another said “I pledge to make a positive impact on others daily.”

“Then, we will put them in the river as a symbolic gesture of hope and community,” Joseph said.

Mollie Stevens, the executive director of Impact Prevention, said the event was to celebrate living healthy and making good choices with kids and the group’s youth-lead teams. She said it was also part of Red Ribbon week to celebrate Enrique “Kiki” Camarena, an undercover DEA agent who was murdered in 1985 while on assignment in Mexico by a drug cartel.

“He was trying to stop drugs from coming into the United States and he was killed,” she explained. “We are trying to keep his memory alive.”

After all the luminaries were ready, the group made their way down the dock. Tea candles were lit in the paper luminaries and then they were launched with their written hopes and pledges floated down the Ohio River.

Charlee Haas, a 10th grader at Rock Hill High School, is a member of the Impact Team.

“I think it is inspiring,” she said of watching the luminaries float away.

Her friend, Allison Ferrell, also a 10th grader at Rock Hill High School, said it was a great event.

SOUTH POINT — Continuity of government and building on progress was the message from candidates in South Point races on... read more