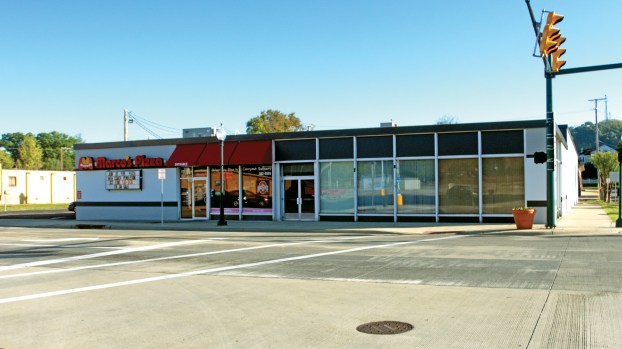 The Marco’s Pizza in downtown Ironton was recently painted and had its parking lot repaved and re-striped. It was done as part of an effort to expand the idea of what is downtown Ironton. (The Ironton Tribune | Mark Shaffer)

Bill Dingus, executive director of the Lawrence County Economic Development Corp., said the recent work of painting buildings downtown is an effort to expand it.

“We want to enlarge the downtown feeling, more towards the Oakley C. Collins Bridge beyond toward Glockner, so we can have a six or eight block downtown, rather than a two block downtown,” he explained. “That has been a thoughtful mission as we develop buildings and do the repainting. We want to develop everything to its maximum potential. We want to have a vibrant downtown.”

An obvious sign of that work is the building that contains Marco’s Pizza and the old AEP company on the corner of Third and Jefferson street. Last month, it got a paint job and the parking lot was repaved and restriped to help with parking and the flow of people picking up their food orders.

Mike Chapman, the owner and franchisee of the Ironton Marco’s Pizza, said the store is having a grand re-opening. It has been in business for four years.

“We want to showcase our store and its new look and show that we have upgraded on the inside and the outside,” he said. “We have a new general manager, Tony LeMaster, and we have a great crew. We are just looking to showcase our location and the whole area.”

As part of that, they will be having a pizza special to draw people in to see the work they have done.

They will also be having a fundraiser for Ironton Athletics on Tuesday with a dinner with Ironton Football coach Trevon Pendleton. The cost is $20 with limited tickets available. People will be able to eat and talk with the coach.

Chapman said the event is part of community outreach.

Chapman said he sees the painting of the building is part of bringing people to downtown.

“We’re trying to attract people who may not have been to this side of town, just to see what it going on,” he said.

Dingus said as part of expanding downtown, the LEDC is working to get a mall built on Second Street, where the Kentucky Fried Chicken and other businesses once stood.

“That will help bring the whole downtown feeling to this area,” he said. “We need to get people on the streets and walking. That’s the way the original downtown was and we are working towards that again.”

He said the LEDC is marketing the empty half of the old AEP and are looking for a store that will draw in pedestrians.

“It’s about 2,200 square feet and we will be recruiting more of a retain/service type of business,” he said. In the back of the building is another 6,000 square feet of space with an inside dock that can be used for storage or warehouse space.

“What we are looking at is an expansion of downtown,” Dingus said. “Downtown Ironton needs to be much larger.”