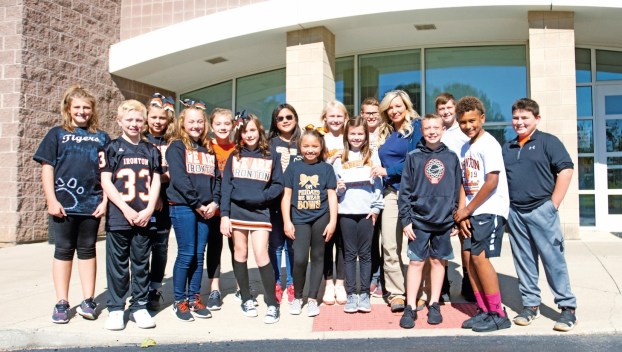 Members of the Ironton Elementary’s Student Leadership Team presented a check for $1,724.89 to Lawrence County Animal Shelter director Denise Paulus on Friday afternoon. With matching funds by Gigi’s Animal Rescue of $3 for every $1 donated, the amount the shelter will get is $6,899.56 in total. (Submitted photo)

A novel lead to the Lawrence County Animal Shelter getting a large donation from the Ironton Elementary School’s Student Leadership Team.

A couple members had a reading club and had recently finished the book, “Shiloh,” by Phyllis Reynolds Naylor. The book, set in Friendly, West Virginia, is about an 11-year-old boy named Marty Preston who finds an abused beagle and conceals the dog from its owner, Judd Travers, until his secret is revealed.

So, when it came to decide on a community project for a penny drive, the fifth-graders picked the animal shelter as the recipient since the shelter was in the midst of renovations.

They were excited to find out Gigi’s Animal Rescue, a nonprofit from Columbus, was to fund the cost of the renovations and would donate $3 for every $1 donated in a crowdfunding campaign.

So, from Oct. 9-Oct. 16, kids in all grade levels brought in coins and dollars to help the animals.

On Friday, the club gave the money to shelter director Denise Paulus.

Kerns said the students brought in a lot more money than she expected.

“This was beyond my expectations, as far as what they were able to raise here,” she said. “I expected a few hundred dollars.”

The homeroom class that raised the most money was treated to a pizza party.

“They brought in $331 themselves,” Kerns said. “So, we had some really motivated kids. And when the kids were aware that it was going to help animals, that gave them more motivation. They were super excited.”

The Student Leadership Team was very happy with the results.

“It was a lot of money,” one of the team members said.

Tara Parnell, also a part of the Student Leadership Team and its book club, said she wanted to help the dogs because of the way Travers treated his dogs.

Parnell had been at the shelter when the renovations started a month ago.

Paulus, for her part, was emotional about the donation.

“I’m overwhelmed with the generosity of these children,” she said. “It is amazing.”

She also invited all the kids to stop by the shelter when they have an open house soon. A date hasn’t been set yet for that.

“I hope everyone can come out,” she said. “We now have a wonderful facility because of generous people like you guys.”

She told the kids that a crew is currently putting epoxy on the floors and walls of the shelter as a way to make it easier to clean and to make it harder for disease to find a purchase like it would on plain concrete.

“So, when you see that, you helped pay for that,” Paulus said.

Renovations to the shelter, which was built in 1991, include a makeover of the main ward with new kennel doors, new concrete flooring with improved drainage, a separation wall, the creation of a room just for puppies, an isolated dog intake room and a food preparation area. All the areas will be finished in epoxy from floor to ceiling. And the building is getting its first heating and cooling system.

“The main objective of everything is to better the welfare for the animals,” Paulus has said.