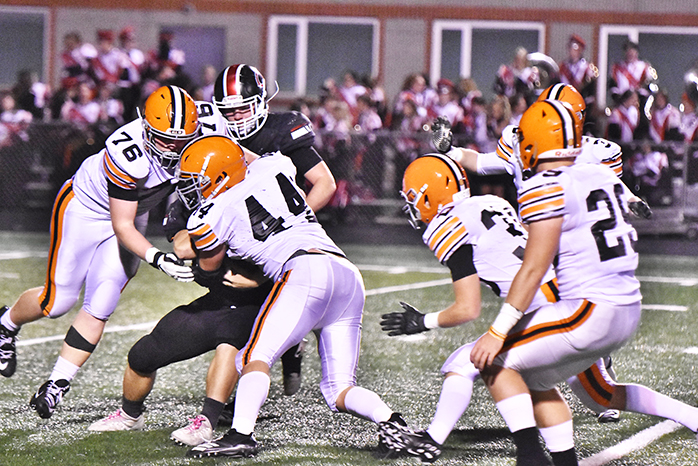 Ironton Fighting Tigers’ defensive linemen Seth Fosson (44) and Nate Cochran (76) combine to make the stop on a Coal Grove running back. Ironton plays at Gallipolis on Friday in a battle for the lead in the Ohio Valley Conference race. Both teams are 5-0 in the league. (Kent Sanborn/Southern Ohio Sports Photos)

It’s Ohio Valley Conference Showdown time again.
The Ironton Fighting Tigers and Gallipolis Blue Devils met in week nine last season with first place in the OVC on the line. Each team entered that game unbeaten in the league, just like this season.
Ironton is 7-1 on the year while Gallipolis is 8-0. Both teams are 5-0 in the OVC. The Fighting Tigers are ranked sixth in the Associated Press Division 5 poll while Gallipolis is No. 5 in the Division 4 poll.
“The message to our kids is we’ve got to continue to do what we do. We have to show up ready to work and get after it. We’re going to treat it like any other game week. Obviously, it’s a huge game for us. We need to get over the hump,” said Ironton coach Trevon Pendleton.
Ironton has a comfortable 45-15-1 lead in the series but the Blue Devils have won the last two meetings. Gallipolis has only won three consecutive games in the series from 1960-62.
Former Ironton coach Bob Lutz was 27-2 against Gallipolis.
This marks the first time that Gallipolis has been 8-0 since 1986 and the poll ranking is the highest in school history.
In last season’s showdown at Tanks Memorial Stadium, Ironton led 20-9 at the half and went up 26-9 with 9:23 left in the third quarter on a 55-yard pass play from Gage Salyers to Brycen Thomas.
The Blue Devils rallied to go up 29-26 but a 21-yard scoring run by Reid Carrico gave Ironton a 33-29 lead with 3:32 to play.
However, Gallipolis came right back with a clutch drive and Justin McClelland hit Cory Call who made an outstanding catch in the end zone for a 15-yard touchdown pass with just 24 seconds to play.
The conversion kick gave the Blue Devils a 36-33 win.
Gallipolis may have more overall size and speed than Ironton, but the Fighting Tigers’ defense could be a problem for the inexperienced Blue Devils’ offense.
Gallipolis had several returning linemen but most of the skilled positions are being filled by newcomers. Still, they have been explosive in starting the season 7-0 for the first time since 1986.
The Blue Devils’ offense is led by a pair of junior running backs, James Armstrong (6-0, 190) and Michael Beasy (6-0, 165).
Armstrong has already made a visit to Ohio State and offers one of the fastest weapons the Ironton defense will face this season, if he plays. Armstrong was injured against Coal Grove and did not play last week. He is expected to be out at least two more weeks.
Beasy has 80 rushes for 615 yards. Armstrong sits at 142 carries for 1,034 yards.
Although the Blue Devils lost four-year starting quarterback Justin McClelland to graduation, junior Noah Vanco (6-2, 195) has turned out to be an efficient addition to the offensive unit.
Vance was 6-of-7 for 36 yards and a TD last week. He is 61-of-97 for 842 yards, eight touchdowns and one interception.
Ironton counters with Reid Carrico, a 6-6-3, 225-pound junior who has committed to Ohio State. Carrico has 110 carries for 828 yards and a 7.5 yards per carry average. He has scored 16 touchdowns rushing and leads the team with 14 receptions for 260 yards and two scores.
Quarterback Gage Salyers is 51-of-97 passing for 850 yards, four interceptions and five touchdowns. He is a duel threat as well, running 53 times for 406 yards and a 7.7 yards per carry with six TDs.
Fullback Seth Fosson had 39 attempts for 259 yards for a 6.6 yards per carry. He has one touchdown. Fosson heads up a strong defensive line that includes Nate Cochran and Junior Jones.
Gallipolis lost a couple good receivers but the cupboard isn’t bare.
Senior Cade Roberts (6-1, 225) returns and is the H-back. The wide receivers are speedy sophomore Donevyn Woodson (5-11, 145), senior Ryan Donovsky (6-1, 180) and senior Ben Cox (6-1, 210). Also in the mix is sophomore Briar Williams (5-10, 150).
The offensive line is led by junior right tackle Riley Starnes (6-5, 295) who has made a visit to the University of Kentucky. Starnes is a three-year starter.
The center is junior Yashua Peaks (6-4, 315), the guards senior Mason Angel (6-2, 280) and senior Cole Rose (6-2, 235), and the other tackle is freshman Issac Clary (6-6, 280).
The Blue Devils’ defense has bent but hasn’t broke for the most part this season. The group runs to the ball well and will utilize a plethora of personnel if needed.
In fact, Gallipolis has had three shutouts in one season for the first time since 2007.
The nose guard is junior Brayden Easton (6-1, 190), the tackles are junior Coen Duncan (6-0, 190) and senior Cole Rose (6-2, 235) while junior Zach Hembly (6-2, 190) is on the right side and senior Trent Meadows (6-0, 190) is on the left.
The linebackers are Roberts and juniors Trent Johnson (5-11, 175) and Cameron Webb (6-0, 170).
The secondary has junior Zach Belville (5-10, 160) and Donovsky the cornerbacks and Armstrong the safety.
Peaks and Clary will rotate some up front.
Andrew Toler does all the kicking.