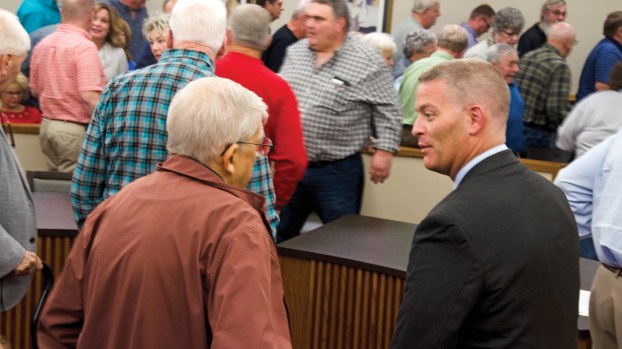 It was the second time within a year that the Lawrence County Republican Party’s central committee had to meet to fill a countywide office and, as was the case last year, they chose a member of one of the county’s school boards to the position.

Paul David Knipp, a member of the Rock Hill school board, was selected to the position of Lawrence County auditor, following the resignation of Jason Stephens, who was chosen to serve as state representative for the 93rd District earlier this month.

It was the culmination of a series of changes that began when Ryan Smith resigned the legislative seat to become president of the University of Rio Grande.

Gilpin, who had originally said he did not plan to seek the replacement job as auditor, was one of those who expressed interest on Monday.

Collins, however, declined the nomination and withdrew his name from consideration.

“I want to thank all of you for the support you have given my family over the years,” he said. “But I’m just going to bow out.”

Lawrence County Commission President Freddie Hayes Jr., who many had said they expected would seek the job, did not put his name up for consideration.

After the four candidates made their pitch, the committee then voted, with Knipp and Payne receiving 17 votes each, Dyer receiving 13 and Gilpin receiving three.

With Knipp and Payne tied and no candidate receiving a majority, a second vote was held between the two.

Knipp then emerged as the victor, receiving 29 votes, one more than the 28 needed to clinch the job.

In his pitch to commission, Knipp had said his main interest in the office was “to serve the community.”

He has served on the school board for 10 years and also works as assistant prosecutor for Jackson County, two positions he will resign to take the auditor job.

Upon Knipp’s win, Gilpin was the first to congratulate him. He was set to hand off the office to Knipp on Tuesday when he was sworn in.

Knipp said he was “a little surprised to win,” but had been confident of his chances.

“I thought I would do well,” he said.

He said he does not plan major shakeups of the office and hopes to build on Stephens’ work.

“Just to continue to run it well,” he said. “There are good people there and we’ll keep things going.”

Lawrence County Prosecutor Brigham Anderson, who presided over the meeting in the absence of county chair Stephens, said, due to it being an unexpired term, the auditor’s office would appear on next year’s ballot, and then again for its regular cycle in 2020. Stephens was re-elected in 2018.

The party’s central committee last met to fill an office in December 2018, when Colton Copley was named as county commissioner following the death of Commission president Bill Pratt.

The Lawrence County Board of Elections has taken no action on a complaint filed in the Ironton mayor’s race. Ironton... read more