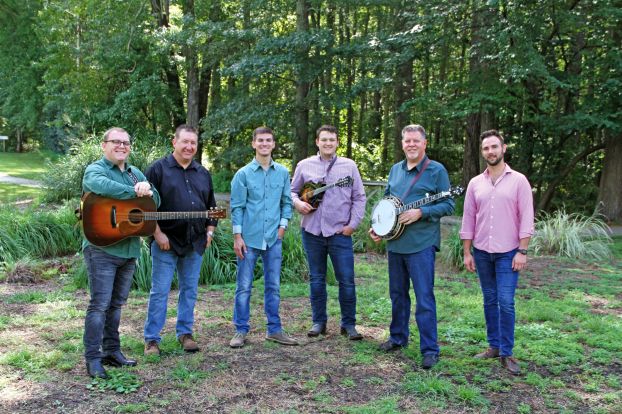 Bluegrass band Sideline will play the Elks club in Ironton on Nov. 1. The energetic band is made up of, from left, Bailey Coe, Jason Moore, Daniel Greeson, Zack Arnold, Steve Dilling and Skip Cherryholme. (Submitted photo)

The award-winning bluegrass band, Sideline, will be performing on Friday, Nov. 1 at the Elks club in Ironton.

Sideline was formed six years ago by Steve Dilling (banjo), Skip Cherryholmes (guitar) and Jason Moore (bass). They were later joined by Daniel Greeson on fiddle, Bailey Coe on guitar and newcomer Zack Arnold on mandolin. All sing as well.

“We all sing and we try to make our shows as versatile and diverse as we can,” Dilling said. “But three of us sing as the main vocalists. We try to switch it around a lot. We try to bring lots of energy.”

They are all long-time veterans of the scene and the band recently won an International Bluegrass Association Song of the Year award for their song, “Thunder Dan.” It also took the top spot on Bluegrass Today’s Most Played of 2018.

“That was amazing,” said Dilling. “It is a huge honor.”

The band had two IBMA nominations this year and individual members of the band have won awards when they were part of other bands. Dilling said he has won 10 IBMA awards, but this one is the one he is most proud of since he was one of the founders of Sideline and they grew it from the ground up.

“Thunder Dan” was written by Josh Manning, of Ashland, Kentucky.

“We have an award for him as well and we hope to present it to him that night at the show,” Dilling said.

Dilling called from the road from South Carolina, since the band is in the midst of a 125-city tour which will take them across American and even into Canada and over to Ireland.

He started playing when banjo when he was just 12 years old.

Dilling said Sideline has a wide range of influences that is evident in their music.

While Journey may not sound like the typical influence on a bluegrass band, Dilling cites not only their style of playing, but lead singer Steve Perry’s way of doing vocals. He said that bluegrass has always added to the genre while retaining its roots.

“The music has moved forward and grown over the years, it’s not just the hillbilly twangy style that started 80 years ago,” Dilling said.

A recent example of the wide range of music the band listens to is that Dilling and his wife went to see Rod Stewart perform in Las Vegas a couple of weeks ago and he was so excited to see a pair of banjos sitting on the stage.

“He never used them,” he said. “But I got excited when I saw them.”

He said that bluegrass remains a community with strong roots.

“I label bluegrass as a minority music,” he said. “It’s grown by leaps and bounds since I started in the mid-80s, thanks to people like Allison Krause and Ricky Skaggs, they brought so many people into our type of music.”

He said one big change is that when they play the large music festivals, a good part of the crowd is made up of young people.

“That was something you didn’t see 15 years ago,” Dilling said, adding the crowds used to made up of middle aged people. “You see kids, 7, 8, 9 years old, just burning up on these instruments. It has evolved, the crowds are getting younger and bigger at these events.”

He said the rise of Americana bands like Mumford and Sons and Wilco has helped bring attention to bluegrass.

“I find these big Americana fests have thousands of people at them and the promoters will bring in a bluegrass band in as well, so that’s bringing people over,” he said. “And bluegrass festivals are adding a few Americana bands in. It’s working hand in hand, so to speak. By the two genres of music working together, I think it is helping both.”

ROME TOWNSHIP — Longevity runs in Pearl Prince’s family. Her mother, Beatrice Harpold Riley, lived to be 105. And, in... read more