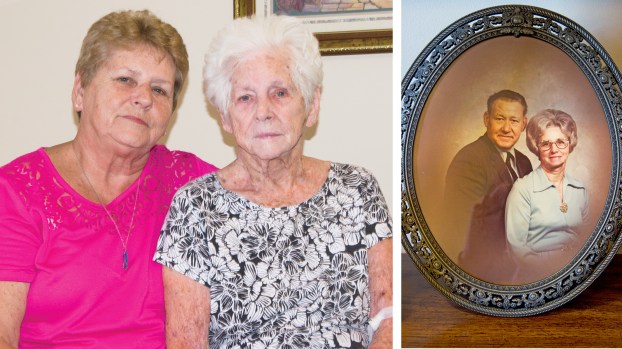 Pearl Prince, seen at the Wyngate at RiversEdge on Tuesday with her daughter, Marilyn Black, will turn 100 on Nov. 6.

Her mother, Beatrice Harpold Riley, lived to be 105.

And, in less than two weeks, she will reach her 100th birthday.

Prince, a resident at the Wyngate at RiversEdge in Rome Township since February, was born on Nov. 6, 1919 on Greasy Ridge to Beatrice and her husband, Perry Riley.

“It was the only place she ever lived,” Prince said of the home, which belonged to her mother.

She began school in the first grade, attending a one-room schoolhouse on Bear Creek, which was a walk down the hill from her home.

She still remembers the name of her first grade teacher in the 1920s.

“Ruth Black,” she said. “She was my first teacher.

She attended school until the seventh grade, with her final year being in the old Chesapeake High School building that now houses the village’s community center.

“I had one teacher that was no good,” Prince said. “But all the rest were good.”

At 15, she married Harry Prince, who was two years her senior, a union that would last 62 years, until his death in 1995.

“Dad worked at Allied Chemical and she took care of the kids,” Marilyn said. “She was a stay-at-home mom and dad was gone a lot for work.”

Prince later took a position at a lunch counter at Grant’s clothing store in Huntington.

She attended services at Mount Hope Church, where she is their oldest member.

“She was last there in September,” Black said. “And they come here to her.”

The church was founded by Prince’s husband in an old shoe repair store, then he donated land where its current building now stands.

Staff at the Wyngate describe Prince as a quiet resident.

Poff said Prince will not be the only Wyngate resident over 100. Another, Mason Maynard, 101, celebrated his century milestone at the facility in May 2018.

Black said her mother enjoys meals at the senior living community and is a fan of Little House on the Prairie and The Waltons.

When asked by Black how she felt reaching 100, Prince had an instant answer.

“Would you recommend it to anyone else,” Black asked.

The family is planning a get together at the Wyngate for Prince on Nov. 6.

Then, that evening, members of the church will visit her for a service.

“She said she just wanted to be able to go to church,” Black said.

The Lawrence County Board of Elections has taken no action on a complaint filed in the Ironton mayor’s race. Ironton... read more