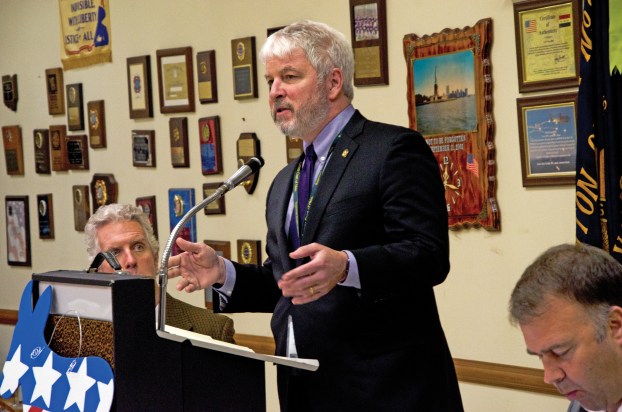 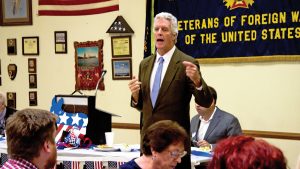 The Lawrence County Democratic Party hosted it annual dinner at the Ironton post of the VFW on Thursday and speakers discussed the importance of next year’s races for the state’s high court.

Justice Michael P. Donnelly was elected to the court in 2018, defeating Craig Baldwin for an open seat, 61 to 39 percent.
Along with Melody Stewart, who defeated incumbent Republican Mary DeGenaro, the two ended the Republican Party’s complete control of the court, creating a 5-2 split.

“We won in 75 counties,” Donnelly said. “And we came close in the others. We broke the stranglehold of one-party rule on the Ohio Supreme Court.”

Donnelly said this had made it so there were “voices on the court who care about decisions made that affect working people, and not just businesses, insurance companies and corporations.”

Joining in him was John P. O’Donnell, who has been elected four times to the Cuyahoga County Court of Common Pleas. He, along with former Ohio Secretary of State Jennifer Brunner, is running in the two Supreme Court races next year.

“That means with checks and balances built in,” he said.

“If the election goes right, we’ll have four Democrats and three Republicans for the first time in a long time,” he said.

Donnelly said he wanted to focus on issues such as transparency, creating a database to track sentencing of different courts.

He pointed to cases where different courts would recommend a 10-year sentence versus probation for the same offense.

He said he also wanted to work to tackle “sentencing by ambush,” in which harsh, unexpected sentences are handed out after a plea agreement.

In addition to Lawrence County, the judges were also stopping by a Democratic Party event in Scioto County Thursday evening.

Donnelly said it was their first visit to this part of the state, having driven down on the new bypass connecting U.S. 23 and U.S. 52.

“It’s absolutely beautiful here,” he said of southern Ohio, adding that he was hoping to see a friend, Lawrence County Common Pleas Judge Andy Ballard, who he has played music with at events.

“He’s a great judge and a great singer,” he said.

Also appearing at the dinner this year was David Pepper, the chair of the state Democratic Party. It was a return visit for him, having last addressed the county party’s event in 2017.

Pepper said victories in the two court races next year would be important, as the court would ultimately rule on maps for congressional redistricting.

“If you have a fair court, they will strike down that map,” he said of the practice of gerrymandering districts to disproportionately favor one party. “Gerrymandering is on the ballot next year.”

Pepper said polls show O’Donnell tied in his race and Brunner leading in hers.

“We have a real opportunity,” he said.

While the Republicans won the governorship, as well as all statewide office, Pepper said the party should not be discouraged.’

He pointed to the court victories and U.S. Sen. Sherrod Brown’s re-election, which he said was by larger margin than his last win in 2012.

Pepper also noted that Democratic nominee Richard Cordray, while unsuccessful for governor in 2018, had won a larger percentage of the vote than Hillary Clinton did two years earlier in the presidential race.

He said the party was also beginning to win over suburbs, which had been the Republicans base in the state for decades.

He said this uptick in the vote would do well for a Democratic nominee against President Donald Trump in next year’s presidential race.

The Lawrence County Republican Party also met on Thursday for a picnic in Ironton. The Ironton Tribune covered their annual dinner in the spring, which featured Ohio Republican Chair Jane Timken as keynote speaker.