Showdown becomes mow down for Ironton 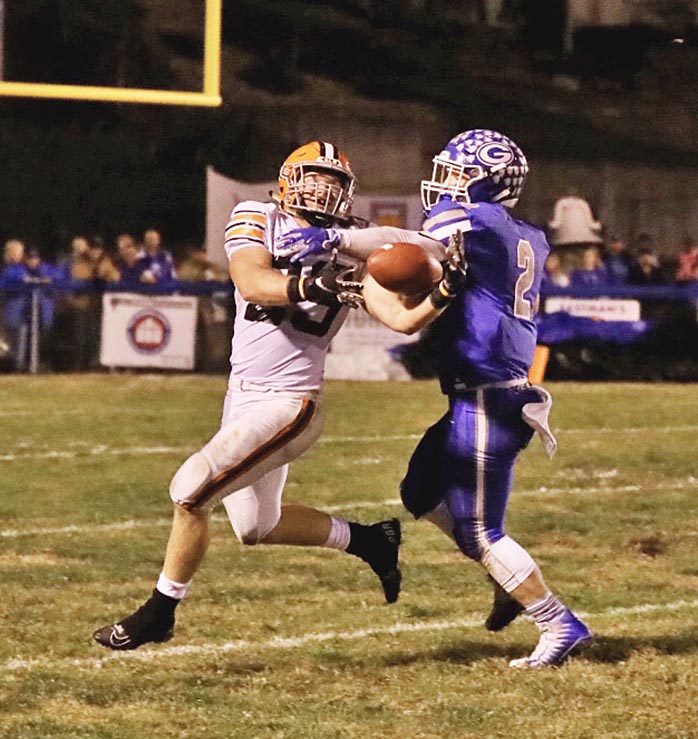 Ironton Fighting Tigers’ Jordan Grizzle (left) uses great concentration to make a catch despite being draped by Gallipolis defensive back Ben Cox. Grizzle turned the catch into a 60-yard touchdown play in a 52-0 rout of the Blue Devils. (Photo by Tim Gearhart)

GALLIPOLIS — If you blinked, you missed it.
The Ironton Fighting Tigers scored in machine gun-like rapid fire as they used four plays to score four touchdowns in an explosive second quarter as they routed the Gallipolis Blue Devils 52-0 in a battle for first place in the Ohio Valley Conference on Friday.
“We’ve been running a lot of different wrinkles in practice and working on them week after week after week, kind of treating Monday and Tuesday like game day for us the past several weeks,” said Ironton coach Trevon Pendleton.
“We’ve tried to set some things up and we were able to break some tendencies tonight that we created. We’ve got playmakers all over the field. They just stepped up and made plays tonight. We put them in position, but ultimately it’s them guys.”
The win not only gave Ironton the inside track to win the OVC title, but the bevy of computer points should give the Fighting Tigers a lock not only a playoff berth but a first-round home game.
Ironton (8-1, 6-0) forced a three-and-out and got the ball at its own 34 to start the game.
Three plays later, Cameron Deere bolted 35 yards to the Gallipolis 20. The drive stalled and Avery Book booted a 32-yard field goal and it was 3-0 with 7:46 on the first quarter clock.
After a series of punts, Ironton had the ball second-and-4 at midfield to start the second quarter.
That’s when Ironton put the game in fast-forward.
Quarterback Gage Salyers then hit Collin Freeman who was wide open in the middle of the field and the 50-yard pass play resulted in a touchdown. Book’s kick made it 10-0 just 10 seconds into the quarter.
The kicking game came into play on the next series as Gunnar Crawford blocked a punt and Ironton got the ball at the Gallipolis 15-yard line.
Seth Fosson ripped right through the Gallipolis defense on the ensuring paly for a 15-yard scoring run and it was 17-0 with 10:33 left in the half.
Gallipolis (8-1, 5-1) was forced to punt a fifth time in the half and Kyle Howell returned the kick 59 yards for a touchdown and it was 24-0 with 9:00 on the clock.
“Special teams stepped up huge. They gave up more return yards than we’d like to on kickoffs. We’ve got to sure that up. But ultimately, special teams stepped up ginormous. They played extremely well,” said Pendleton.
Gallipolis drove to the Ironton 28 only to have Ironton’s defense halt the march for no gain.
On the next play, Salyers hit Reid Carrico on a short wheel route and the junior speedster took it to the house for a 72-yard scoring pass play and a 31-0 lead.
But Ironton wasn’t finish.
After a sixth punt, Salyers hit a streaking Jordan Grizzle who made the catch and went 60 yards for the touchdown and a 38-0 lead at the half.
“We’re big on getting off the field on third down and we was able to do that. We didn’t create as many turnovers as we want, but we was able to get off the field on third down so ultimately it was a turnover for us and we was to capitalize on the other end,” said Pendleton.
In the quarter, Ironton ran four plays that all resulted in a touchdown. The Fighting Tigers ran only 17 plays in the entire half.
The Fighting Tigers kept the foot on the accelerator to begin the second half with a quick 61-yard, five-play drive capped by Carrico’s 18-yard run with 8:33 left on the running clock. Izsak Unger kicked the conversion and it was 45-0.
Ironton’s backups got the final score when Kameron Browning ran 28 yards for a touchdown with four minutes to play and it was 52-0, the most points scored by the Fighting Tigers against Gallipolis.
Next Friday, Ironton host Portsmouth and Gallipolis visits South Point.
Ironton 3 35 7 7 = 52
Gallipolis 0 0 0 0 = 0
First Quarter
Irn — Avery Book 32 field goal 7:46
Second Quarter
Irn — Collin Freeman 50 pass from Gage Salyers (Avery Book kick) 11:50
Irn — Seth Fosson 15 run (Avery Book kick) 10:33
Irn — Kyle Howell 59 punt return (Avery Book kick) 9:00
Irn — Reid Carrico 72 pass from Gage Salyers (Avery Book kick) 3:00
Third Quarter
Irn — Reid Carrico 18 run (Izsak Unger kick) 8:33
Fourth Quarter
Irn — Kameron Browning 28 run (Izsak Unger kick) 4:00
——
Irn Gal
First downs 16 6
Rushes-yards 30-262 23-61
Passing yards 182 87
Total yards 444 148
Cmp-Att-Int 3-5-0 14-20-0
Fumbles-lost 1-0 2-1
Penalties-yards 5-40 1-5
Punts-average 1-18.0 7-36.4
——
Individual Leaders
RUSHING — Ironton: Reid Carrico 6-44, Seth Fosson 3-28, Gage Salyers 4-36, Cameron Deere 2-38, Kyle Howell 1-12, Beau Brownstead 2-15, Kameron Browning 7-65, Caleb Murphy 2-23, Richard Thompson 1-1, Jacob Slone 1-1, team 1-minus 1; Gallipolis: Michael Beasy 16-31, Briar Williams 2-38, Cade Roberts 1-1, Noah Vanco 1-minus 8, team 1-minus 12, Caleb Geiser 1-0, Brody Fellure 1-4.
PASSING — Ironton: Gage Salyers 3-5-0 182; Gallipolis: Noah Vanco 13-18-0 87.
RECEIVING — Ironton: Collin Freeman 1-50, Reid Carrico 1-72, Jordan Grizzle 1-60; Gallipolis: Donevyn Woodson 1-9, Ben Cox 3-36, Briar Williams 3-minus 2, Cade Roberts 3-16, Camron Webb 1-13, Michael Beasy 1-17, Trent Thompson 1-minus 2.

Jim Walker jim.walker@irontontribune.com CHESAPEAKE — Football is the favorite game of the Rock Hill Redmen. Keep Away is their second... read more