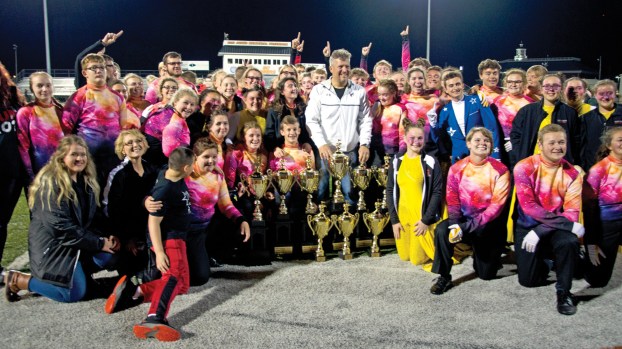 Dawson-Bryant High School’s performance at the 2019 Buckeye Classic was titled “Like a Diamond in the Sky,” and, at the end of the night, it was clear they had shined brightly.

Coming in as first runner up overall was Portsmouth West High School’s “Sensational Senators” marching band, with their show, “The Secret of Machines,” followed by last year’s champions, South Point, for their performance of the environmentally-themed “I Am Shelter.”

During the awards ceremony, Dawson-Bryant band members grew increasingly excited as the trophies piled up, followed by the big announcement.

“It’s hard to have words at this moment,” an elated band director Thomas Zerkle said, noting that this year’s band had earned the best performing record in the school’s history. “It feels wonderful. The students have worked so hard to get to this moment.”

As host school, Ironton does not compete in the event, but does an exhibition performance prior to the awards ceremony, where band members help distribute trophies.

“This is a great event for the students,” Freeman said. “It gives them a goal to toward and a time to shine. And they prove the community how important music and arts are in school.”

The event is organized by Freeman and Jeff Sanders, the school’s band director, along with assistant band directors Will Smith and Angel Malone.

“This is one of the largest band competitions in the Tri-State area,” Freeman said, adding that the event also helps bands to earn a superior rating from judges.

“That way, they can take part in state OMEA finals,” she said.

More than a name on the wall: DB Class of 1969 honors fallen classmate

On Friday evening, members of the Dawson-Bryant Class of 1969 gathered at the high school to unveil a plaque honoring... read more