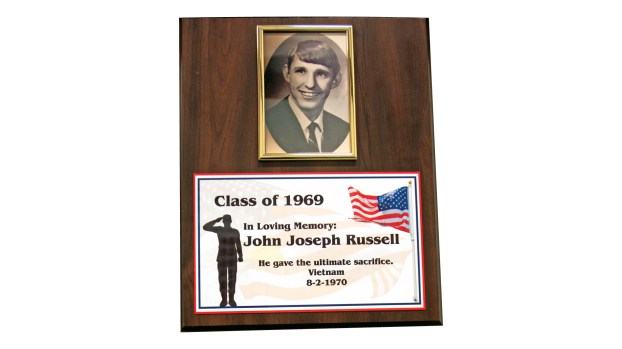 On Friday evening, members of the Dawson-Bryant Class of 1969 gathered at the high school to unveil a plaque honoring their fallen classmate, Johnny Russell.

More than a name on the wall: DB Class of 1969 honors fallen classmate

On Friday evening, members of the Dawson-Bryant Class of 1969 gathered at the high school to unveil a plaque honoring their fallen classmate, Johnny Russell.

Although it has been five decades since they graduated, Russell, who was affectionately nicknamed “Possum,” had never been forgotten.

After graduation, Russell was drafted into the U.S. Army and was sent to Vietnam, where he was killed by an explosive device on Aug. 2, 1970. He was the only member of the class to die in the war.

After the most recent class reunion, they decided they needed to put up a plaque in the high school wall that honors veterans. It is a simple plaque with his picture, his class, when he died and the words “He gave the ultimate sacrifice.” There is also a rubbing of his name from the Vietnam Veterans Memorial Wall.

“Johnny was one of those kids that was always smiling,” said classmate Lena Conn. “A great kid, everyone liked him.”

“We always remember him,” said classmate Judy Malone. “We should have done this a long time ago, but we are older now, more mature, and we decided it was time to do something.”

Since the band was practicing, the 46 members of the class and family members moved outside to have their remembrance.

Danny Brammer, who was the class president during all four of the high school years, said the virtual Vietnam Memorial Wall only mentioned that Russell was killed in hostile territory and passed away on Aug. 2, 1970. He said he could not add anything to that day, so he decided to talk about the day he was born and the day he died.

He said the nickname of “Possum” was not disrespectful, but rather that Russell smiled all the time and his smile was warm and never fake.

“If you wanted to see a smiling face, you just had to find John,” Brammer said. “John was respectful. I can never recall a single time John was disrespectful or disruptive.”

Classmates recalled Russell as a good kid all his life.

“He had a great heart,” said one friend.

Another classmate recalled that Russell stood up in church and said he wouldn’t come back from Vietnam.

“He told me that if he didn’t see me again here, he would see me up in Heaven,” another classmate recalled.

The simple ceremony ended with a prayer and a playing of the Statler Brothers song, “More Than a Name on the Wall.”

SOUTH POINT — Superheroes, monsters, soldiers, wizards, princesses and others took to the streets and sidewalks on Friday. Both elementary... read more