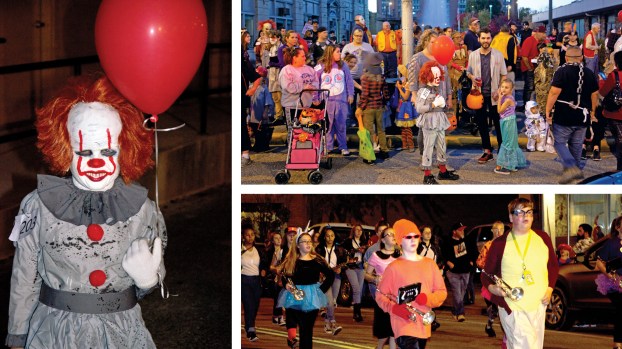 On Monday night, the ghouls took over the streets of Ironton. A couple of IT wandered through the streets of downtown as well as some people ready for The Purge, several Fortnite characters, a pair of Black Panthers, as well as a T Rex and a giant chicken.

People went from business to business for candy as part of Ironton’s annual Safe Trick or Treat. A large number of businesses and politicians set up in the Ironton City Center to pass out treats.

And there were a lot of trick or treaters since it was a warm, rain-free October night.

Still dressed in their witch costumes, Amanda Cleary and Abby Kuehne, co-owners of the The Vault Market, walked up and down Third Street picking up candy wrappers and other Halloween debris after they were cleaned out of treats at their store.

“We decided to dress up as witches and give out apples,” Cleary said. The costumes and treats were references to the story of Snow White. “So, we handed out 20 bags of Ohio-grown apples in about 25 minutes. It was a whole lot of kids. We are excited to see so many people downtown and the participation of the community and the business owners that all came together to make this a fun night for all the children.”

Ginger Gillenwater, owner of Gillenwater Group LLC, also had a successful night of handing out treats.

“We had enough candy for 2,000 kids and ran out an hour into the event,” she said. “But that is what we want. It was a great turnout.”

At 7 p.m., variously costumed trick or treaters gathered at the Rotary Fountain Square by a waiting police car and fire trucks for the parade. The Ironton High School Million Dollar Marching Band lead the assembled ghouls to the Market Square and splash park area to have their costumes judged by members of the Ironton Rotary Club and Ohio University Southern students.