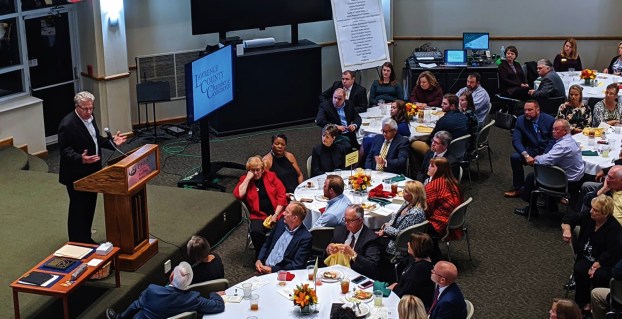 “It’s always an honor to come back to what I call my second home, southern Ohio,” keynote speaker Bob Walters, the vice president of operations for Vertiv in Americas, said.

The awards dinner named Armory Smokehouse and Frisch’s Big Boy as the Businesses of the Year because they made “significant contributions to the economic health of our community, made financial contributions, promoted business growth, employee development, worked under sound business practices, used common sense and worked to provide a great service to our community,” said Jodi Rowe-Collins as she presented the award to Jerry Rowe.

Mike Patterson, who was presenting the 2019 George Patterson Community Servant award, named after his father, spoke of the work ethic instilled in him.

“That’s what service is all about, doing something for somebody else without expecting anything in return,” he said.

“My late father taught me that you give back,” he said. “You don’t always take, you gotta give back to keep moving forward.”