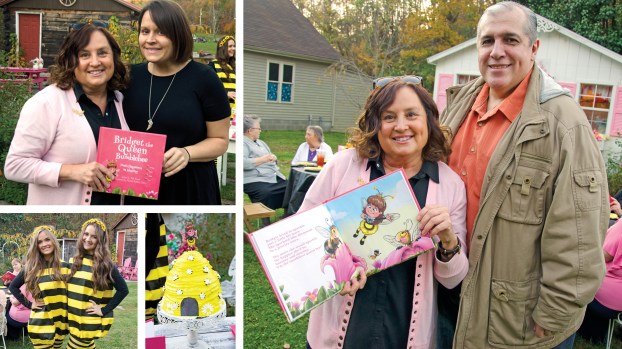 An Ironton author hosted a launch for party for her latest children’s book on Monday.

Vicki Roach, who owns and operates the Tea Treats & Sweets Cottage and Cowboy Cabin, off State Route 93, said she has just released her second work, “Bridget the Queen Bumblebee Finds Happiness in Sharing,” which she completed with illustrator Ricardo Ramirez.

The book is based on her daughter, Bridget Adams, who she always referred to as “Queen Bee.”

She said her books are Christian works that share life lessons.

“It teaches the value of sharing,” Roach said. “Sometimes, in life, you’re not always treated fair, but you should still share.”

Roach and Ramirez hosted about 20 friends at the cabin, where guests were served a beehive-shaped cake and two Ironton High School students, Georgia and Lilly Slagel, portrayed as bumblebees for the event.

Roach said Ramirez’s contribution to the work was a key to its success. It is their second collaboration.

“Without illustration, a story is just words,” she said.

Roach’s first book, “Fairies Love Oreos,” was released earlier this year and she said her next book, to be released later this year, will be aimed at boys.

She said she plans to do a signing at The Vault Market on Center Street in Ironton in coming months, and will announce that soon.

Woman arrested on FBI warrant: Was dumpster diving when found by police

A simple call about someone going through a dumpster ended with a woman being picked up by the U.S. Marshals... read more