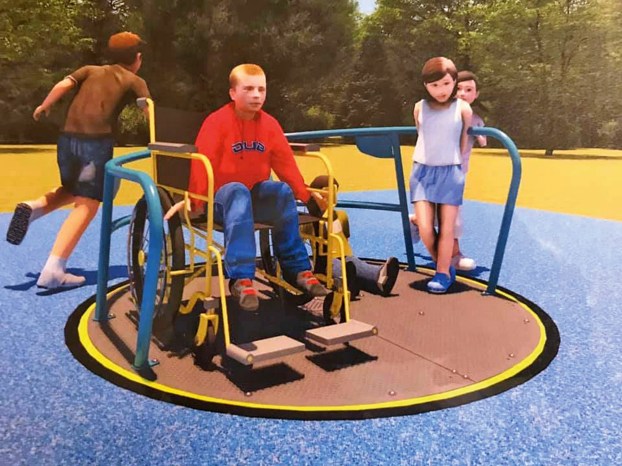 This illustration depicts a new merry go round, which will be installed at the village park in South Point in coming months. Mayor Jeff Gaskin said the piece of equipment was ordered this week and is 100 percent ADA-compliant. (Submitted photo)

Park to get wheelchair accessible merry-go-round

SOUTH POINT — The village of South Point will be getting a new merry-go-round for its park in coming months.

Mayor Jeff Gaskin said he signed a purchase order on Wednesday for the piece of playground equipment, which is 100 percent compliant with the Americans with Disabilities Act.

“The addition of the whirl brings the total to a little over $100,000 invested in our park over the last few years,” he said.

Gaskin said the merry-go-round was funded from raffle sales for a confiscated car from a drug dealer, private donations and the village’s general fund.

He said it can hold two wheelchairs, which are then held safely in place by centrifugal force.

He said it will be shipped in six weeks, but, due to weather, they may have to wait on installation for the rubber perimeter for the piece, but expects it to be in place by spring.

“This addition brings us closer to our goal of universal access,” he said.

FAYETTE TOWNSHIP — Since January, the Fayette Township Trustees have been collecting scrap tires from the side of township roads... read more