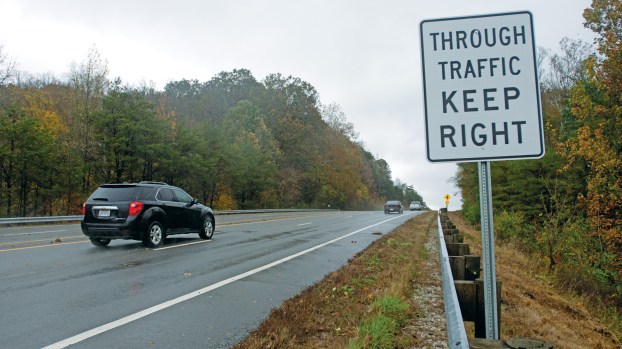 A new sign adorns the side of State Route 93 north of Ironton, cautioning drivers to stay in the right lane. The Ohio State Highway Patrol requested the sign after a dozen accidents on the road involving collisions with cars waiting to turn left onto Porter Gap Road. (The Ironton Tribune | Mark Shaffer)

If you’re driving out of Ironton, headed north on State Route 93, it would be wise to follow the instructions on a newly-installed sign to prevent getting into an accident. Otherwise, you run the chance of getting a ticket.

Recently, the Ohio Department of Transportation installed a sign asking people to stay in the right lane.

The request for the sign came from the Lawrence County post of the Ohio State Highway Patrol.

OSHP Lt. Nick Lunsford said the post had noticed that there were a lot of accidents on State Route 93 near the intersection with Porter Gap Road.

“I ran the numbers and in the past five years, we have handled 12 injury crashes at that intersection. One of those was a fatal crash in 2018,” he said. “The four-lane road coming out of Ironton, you top that first hill crest, and there is a road to the left. That is Porter Gap Road. Cars stop in that left lane to make a left turn and cars travelling in the left lane top that hill crest and then can’t stop in time if there is a car stopped in front of them.”

He said the speed limit on State Route 93 is 55 mph in that area and if a car makes it up to, or faster than, the legal speed limit, “by the time they see the stopped car, it is too late for them to stop.”

“We want motorists, if they are continuing northbound on State Route 93, to stay in the right lane until they get past Porter Gap Road,” Lunsford said. “Then, they can merge in the left lane to pass slower traffic if they want.”

Lunsford said they will be increasing patrols in that area.

“We will have extra troopers in that area and we plan to work with our aviation section to have a pilot monitor the area on different occasions to look for that violation. Our troopers will stop the offenders down the road.”

He said the increased patrols will typically be in the afternoon and evening hours, because that is when they see a spike in crashes.

“So, that is when more enforcement will take place,” Lunsford said. “All we are asking is people to get in the proper lane and follow the speed limit.”