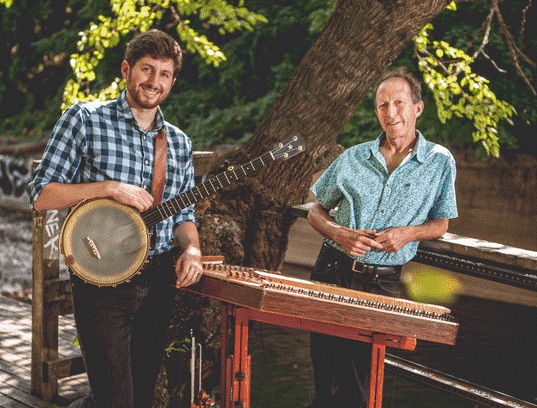 Father and son duo, Ken and Brad Kolodner, along with Rachel Eddy will perform at Ohio University Southern’s Bowman Auditorium at 7:30 p.m. on Saturday. (Submitted photo)

Father and son duo, Ken and Brad Kolodner, along with Rachel Eddy will perform at Ohio University Southern’s Bowman Auditorium at 7:30 p.m. on Saturday.

Ken Kolodner plays the hammered dulcimer, while son Brad, plays the clawhammer banjo. They will be joined by fiddler and guitarist Eddy will join the duo for this performance. Admission is $10, tickets are available at the performance, and OU students are admitted free with ID.

The father-son team Ken and Brad Kolodner weave together a captivating soundscape on hammered dulcimer, banjo, fiddles and vocals pushing the boundaries of the American Old-Time tradition into uncharted territory.

Regarded as one of the most influential hammered dulcimer players and Old-Time fiddlers in North America, Baltimore’s Ken Kolodner has joined forces with his son, Brad Kolodner, a rising star in the clawhammer banjo world. Together, they infuse their own brand of driving, innovative, tasteful and unique interpretations of traditional and original Old-Time tunes and songs with a creative curiosity that lets all listeners know that a passion for traditional music yet thrives in every generation. They regularly perform as a quartet with fiddler, guitarist and vocalist Eddy, formerly of Uncle Earl, and bassist Alex Lacquement.

With their commanding and tasteful choices. Ken and Brad released their first recording, “Otter Creek,” in 2011 which became the most played instrumental recording on the international Folk-DJ Radio charts. Brad’s original composition “Otter Creek” was the most played instrumental on the charts. Ken and Brad released “Skipping Rocks,” their second album, in September 2013 to much critical acclaim. “Skipping Rocks” debuted at #4 on the Folk-DJ Charts and in the top 20 on the Roots Music Charts.

They released their third studio album in the fall of 2016. The new recording features Ken & Brad with Eddy and Lacquement. Eddy hails from West Virginia, where she grew up steeped in Appalachian music and dance. Her multi-instrumental talents and soulful singing bring an incredibly powerful energy to the group. Lacquement is one of the most in-demand and versatile bass players in the Mid-Atlantic. Concert appearances for Ken and Brad include performances at The Kennedy Center, The Walnut Valley Festival, The Old Songs Festival, The Birchmere, The Charm City Folk and Bluegrass Festival, The Champlain Valley Folk Festival, and The Creative Alliance as well as numerous live radio broadcasts, concerts and festivals along the Eastern seaboard from North Carolina to Vermont and across the country from Wisconsin to Arizona.

Prior to performing with his son regularly in 2009, Ken toured and recorded for many years with the legendary world music trio, Helicon with Chris Norman and Robin Bullock.