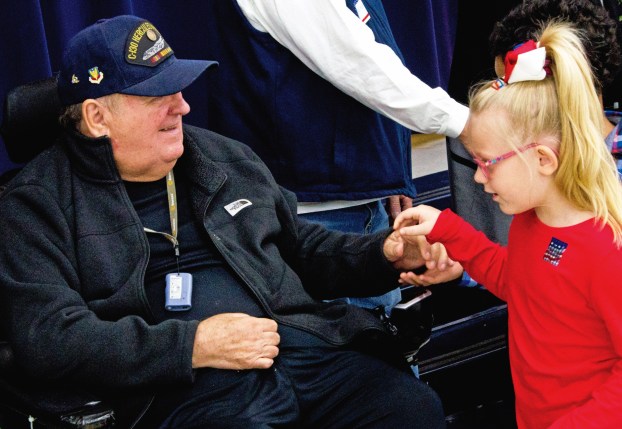 Veterans from around the community were invited to a lunch at the school, which was preceded by an assembly featuring students singing patriotic songs.

The assembly, an annual tradition at the school, draws a large crowd and is one of the biggest events for the holiday at the county’s schools.

It opened with a procession and bagpipes, played by Roger Casey, followed by an opening prayer by Kaitlyn Evans.

Students read remarks on the holiday and explained such ceremonies as the MIA table and the folding of the flag, which was conducted by members of U.S. Marine Corps League Detachment #340.

The Marines also laid a memorial wreath to a playing of “Taps” by Trevor Boltz.

“This is for those who are no longer here,”Cmd. Sgt. Maj. Paul Royster said.

Each year, the school raises money for the Wounded Warrior Project.

Clay thanked the students for their work and asked if they thought they could top that amount next year, to which they cheered.

The Marine Corps also presented three awards at the close of the assembly.

Distinguished Citizen Awards were given to the school’s librarian, Harriet Ramsey, who organizes the event, as well as Clay. The school was also given a Distinguished Service Award for all of their efforts.

Others who took part in the event included Angela Young, who sang the National Anthem, Elysa Jackson, who read a thank you poem, and Micha Workman, who read a Veterans Day Prayer.

Following the ceremony, veterans lined the walls of the cafeteria and students filed past, shaking hands with each and thanking them for their service.

A video of the assembly will be posted on the school’s website.

The Lawrence County Developmental Disabilities said on Friday that due to the failure of their levy on Tuesday’s ballot, they... read more