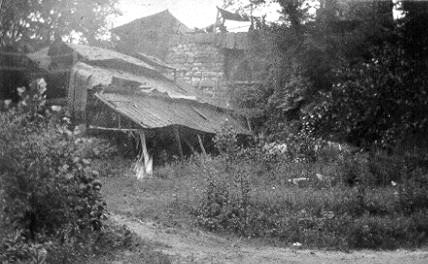 On This Date in History: Olive Furnace Sold

In 1846, Olive Furnace, named for nearby Olive Creek, was built by John Campbell and John Peters.

The furnace, mines and surrounding town were on 3,600 acres of land on the southern boundary of Washington Township, which is located at the 21-mile marker of State Route 93.

Like most furnace communities, there was also a blacksmith shop, carpenter shop, company store, church, school and a few dozen houses for the workers. This furnace produced about 16 tons of iron daily, which required nearly 350 acres of trees per year.

Olive Furnace was a significant part of the Underground Railroad in Lawrence County. Abolitionists of slavery, called conductors, helped slaves escape along the literal Iron Railroad, hiding them in furnace communities along present-day State Route 93.

Beyond Olive Furnace, travelers would move toward the next stop at Poke Patch in Blackfork.

After seven decades of service, the furnace was sold for scrap in 1915, making it one of the last charcoal furnaces in the region to blow out.

The 48-foot stone stack is still standing and is the largest remaining in Lawrence County. It is also the only furnace whose base was carved out of the natural rock and is supported by a Roman style arch.

Originally, there was an additional arch connecting the stack to the engine house, but it collapsed decades ago. The back half of the existing arch collapsed a few years ago. The interior firebrick lining of the stack is still intact and the foundation of the steam engine house is still visible.

Every year, volunteers work tirelessly to clean up the furnace property. Several attempts have been made to restore the furnace, but, so far, there have not been any contractors willing to tackle such a precarious project.

Olive Furnace was added to the National Register of Historic Places in 2007 and, in 2016, as part of Lawrence County’s Bicentennial celebration, an official historical marker was installed at the site.

Nicole Cox is a trustee at the Lawrence County Museum and Historical Society and owner of LawrenceCountyOhio.com. She can be reached at nsratliff@gmail.com.

In the front seat with George

There have been a rare number of times in my life when I have had the great honor to spend... read more