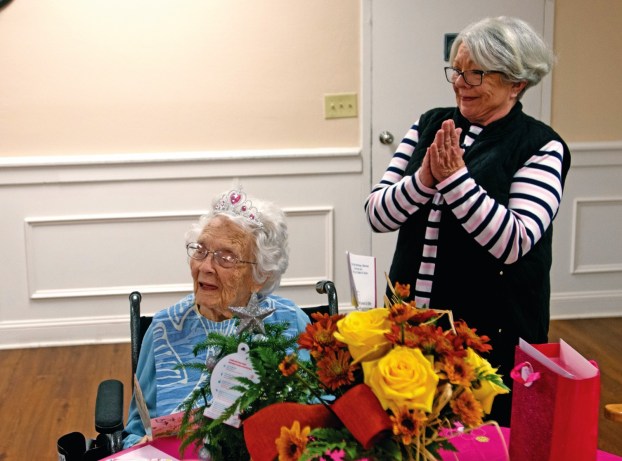 Verna “Bun” Sloan and her daughter, Jo Ann Steinbeck, look on as family and friends sing ‘Happy Birthday’ on Saturday at her a celebration of Sloan’s 104th birthday. (Submitted photo)

Verna “Bun” Sloan will celebrate a rare event, on Friday she will turn 104.

The Harbor HeathCare resident celebrated the event early when family and friends gathered to have cake and ice cream on Saturday.

Clad in a tiara, she was excited to see everyone, although she sometimes had to be reminded who people were.

Before the singing of “Happy Birthday,” her daughter, Jo Ann Steinbeck, explained how she got the nickname of Bun on the day she was born.

“It was the first day of rabbit season,” explained Steinbeck, “Her father said ‘I don’t have to go rabbit hunting today, I have my own little bunny.”

Sloan was born in Pollard, Kentucky. She moved to this area after marrying her husband, Harold Sloan. They moved to Ohio. Harold passed away in 1981.

Sloan, along with Della Burton of Kentucky, was one of the last people to cross the old Ironton-Russell Bridge, driven across in final car before it closed in 2017.

Steinbeck said it was a blessing to still have her mother.

“We are very blessed,” she said. “And she was very healthy and active up until last May. She used to just walk, walk, walk.”

Asked how her mother passed the century mark, Steinbeck said “her motto has been, all her life, ‘if you rest, you rust.’ That’s a message.”

Steinbeck said the family has always had big birthday parties over the years, usually sit-down dinners with up to 100 guests. This year, they decided to go with a smaller gathering.

“We didn’t feel that was really manageable. So, we offered this up to family and friends,” Steinbeck said. “This way, she’s really comfortable with everybody.”

Sloan was tickled to see everyone and was amused that she was decked out in a crown and amused that the newspaper was there to write an article about her.

She said she has a lot of memories, but couldn’t pick just a couple as her favorites.

“Oh, there are too many,” she said. “I don’t think I could pick out just one. I would have to sit and think for days to pick one and that would be hard to do.”