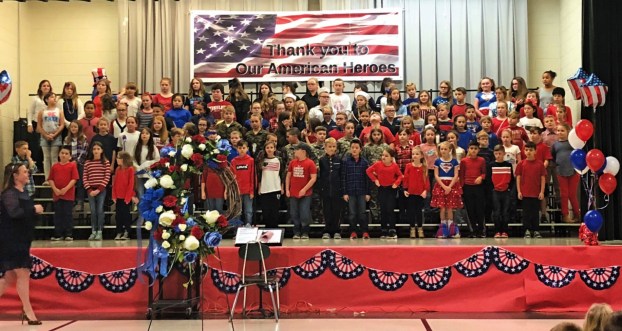 Fairland West hosts veterans: Those who served were invited by students

ROME TOWNSHIP — Veterans from the eastern end of the county and others were honored on Monday at Fairland West Elementary School’s program.

The ceremony opened with the colors being presented by Boy Scout Pack 36, followed by an introduction of each veteran, who was invited by one of the school’s students.

“Each veteran stepped to the microphone and gave their name, branch of service and whether they were in a conflict,” assistant principal Sandy Joseph said, stating that there were those present who has served in Iraq, Afghanistan, Operation Desert Storm and one World War II veteran, Stanford Fulks, of Crown City. “It’s important for the kids to know the sacrifices that have been made.”

Joseph said that more than 100 veterans were present for the event.

“She told the children about how a special day is set to honor them,” she said.

The Lawrence County commissioners were present and Deanna Holliday spoke for the group.

“She did a beautiful job and praised the children for honoring the veterans,” Joseph said.

Other who took part in the event were the Rome Township Trustees and members of the Proctorville post of the VFW.

The veterans were also treated to patriotic songs, such as “God Bless America” and “You’re a Grand Old Flag,” from the children, at the direction of the school’s music teacher, Susan Dunfee.

Afterward, a slide show of submitted photos from students of community veterans was shown, set to the song “We Remember.”
“It was very moving, and a great way to honor those present, as well as those from the community who have passed on,” Joseph said.

Afterward, the veterans and the students who invited them were treated to refreshments in the school’s gym, served by parent volunteers.

Wyngate pays tribute to vets: Senior living community is home to many who served

ROME TOWNSHIP — A ceremony at the Wyngate at RiversEdge on Friday honored the veterans who are residents in the... read more