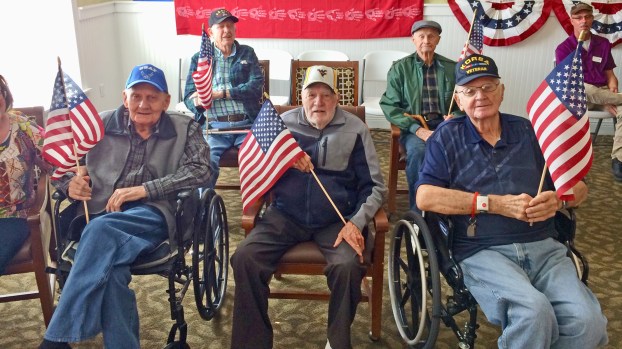 Wyngate pays tribute to vets: Senior living community is home to many who served

ROME TOWNSHIP — A ceremony at the Wyngate at RiversEdge on Friday honored the veterans who are residents in the senior living community and paid tribute to all who have served or made the ultimate sacrifice.

Since its opening five years ago, the Wyngate has hosted the annual service, partnering with Hospice of Huntington and inviting the public and community to take part.

Due to the temperatures, this year’s event took place indoors, but, in years past, there was an outdoor ceremony with a gun salute by members of the Proctorville VFW Post 6878.

This year, VFW members posted the colors and came inside to meet with the veterans and shake hands, activities director Julie Poff said.

The Wyngate has several veterans in its assisted living and independent living buildings, including those from World War II and the Korean War.