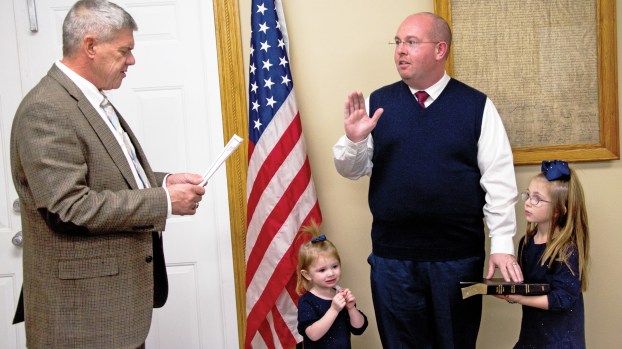 South Point Mayor Jeff Gaskin administers the oath of office to new council member Brad Adkins at village hall on Tuesday. Adkins was appointed to the seat left vacant by the death of Bill Patrick. With Adkins were his daughters, Bristol, holding the Bible, and Brinley. (The Ironton Tribune | Heath Harrison

SOUTH POINT — Brad Adkins was appointed to the vacant seat on the South Point Village Council at Tuesday’s meeting.

“In August this year, we lost a member of our team, Bill Patrick,” Mayor Jeff Gaskin said at the start of the meeting, outlining the process. “The council has 30 days to appoint someone or the mayor shall choose. So, tonight, the mayor shall appoint Brad Adkins after consulting with the council.”

Gaskin said they had decided the person who came in third in the race would get the appointment, but they did not announce it until now, so as not to influence the election.

The meeting was crowded, with many of Adkins’ family and friends present to watch him be sworn in, as his daughters, Bristol and Brinley, joined him.

Following the swearing-in, he took part in the council meeting and was quickly seconding motions and taking part in business. He discussed, with village administrator Russ McDonald, taking a tour of the village sewer plant.

Adkins said, after the meeting, that he did not find out the news until after the election.

He said one of the issues he wants to focus on is police funding.

“So they get the funding they need and they’re not stretched thin and are able to get out on the streets,” he said, adding that he also wants to pursue funds for street projects.

The council also returned to the business of a disturbance of the peace ordinance, holding a third reading and passing it in a unanimous vote.

It was an issue they had been pursuing since the summer.

• Heard from engineer Kevin Wood, who gave an update on infrastructure projects and methods of pursuing funding.

Projects funding being sought for include water line replacement for the village, storm sewer work on Billie Joy Drive and rebuilding a street on Tiffany Lane.

Wood outlined several grant and loan options and he said an income survey is being conducted in some neighborhoods in order to qualify for community development block grants. 100 households are being visited door-to-door and 76 responses have been collected.

• Heard from Alan Wagner, who was appointed, along with two others, to study the issue of vicious dogs after the village’s pitbull ordinance was repealed. He presented council with the group’s suggestions, for them to look over by next month’s meeting.

• Approved the purchase of a mini pumper fire truck and to enter into a lease/purchase agreement. Funds will come from the village’s fire levy.

• Heard from Gaskin, who said the village has made $5,614.10 since investing money with STAR Ohio in February.

A West Virginia doctor, who was arrested in Ironton in 2017, has lost his license to practice medicine after pleading... read more