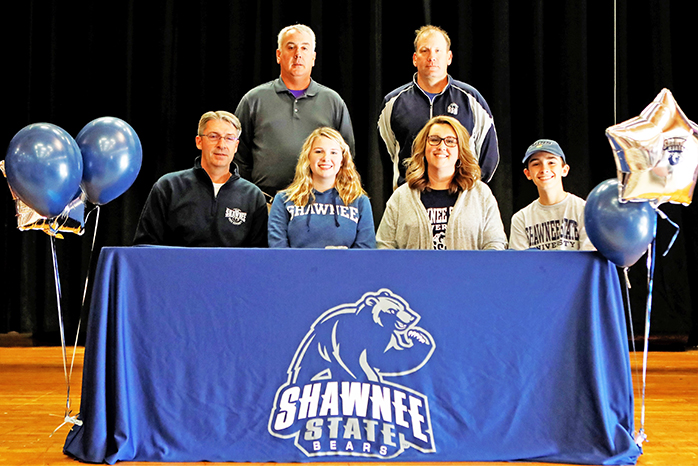 CHESAPEAKE — Maybe Alaina Collins doesn’t play like the boys, but she plays right along side of them.
And that places her on the Shawnee State women’s golf team.
The Chesapeake Lady Panthers’ senior golf standout signed a letter-of-intent on Wednesday to play for the Bears.
Collins said she learned to play at a young age with her father and grandparents and never stopped playing.
“I’ve just always played. I played all through middle school and all through high school,” said Collins.
Playing golf with male golfers continued in high school. Chesapeake doesn’t have a girls’ team so Collins played on the boys’ team. She said the experience proved to be very advantageous.
“It’s made me tougher. I feel like I’m going to have an advantage being on an all-girls’ team after being on an all-boys’ team,” said Collins. “They treat me like the rest of the guys. I have a lot of friends so it’s really great having them.”
There were some other schools that showed interest, but Collins basically glossed over them.
“This is the only school I knew for sure that I was interested in,” said Collins. “They had my major and I felt really comfortable at the university. And it was always a place that I always thought I would end up at, especially having this golf offer I knew for sure I would end up there. I’m excited.”
Shawnee State Bears’ head coach David Hopkins has had Collins on his radar for quite some time and he was very happy to get her commitment.
“I watched Alaina play in the district tournament and she’s going to be a good player for us,” said Hopkins. “She’s a great worker, great kid, (Chesapeake) coach (Terry Kimble) had nothing but great things to say about her.
“She’s a southern Ohio kid that we want to keep around in our program, go to Shawnee State University and graduate and go on with her life. She’ll have a chance to play for us right away, there’s no doubt about that.”
Collins isn’t sure if she’ll play immediately and she’s prepared to work for her position on the team. But she admitted she likes the challenge.
“As far as the environment of the team, I’ve heard it’s really good. They have four tournaments in the spring and four in the fall, so that’s what I’m up against,” said Collins.
Hopkins said the Ohio Valley Conference has several college prospects who have drawn his attention.
“I tip my hat to the OVC. In southern Ohio, there aren’t many golf leagues with women players and the OVC is doing a nice job. The OVC people and women’s golf I tip my hat. They’re doing it the right way,” said Hopkins.
Collins plans to major in health sciences and then obtain a master’s in occupational therapy.