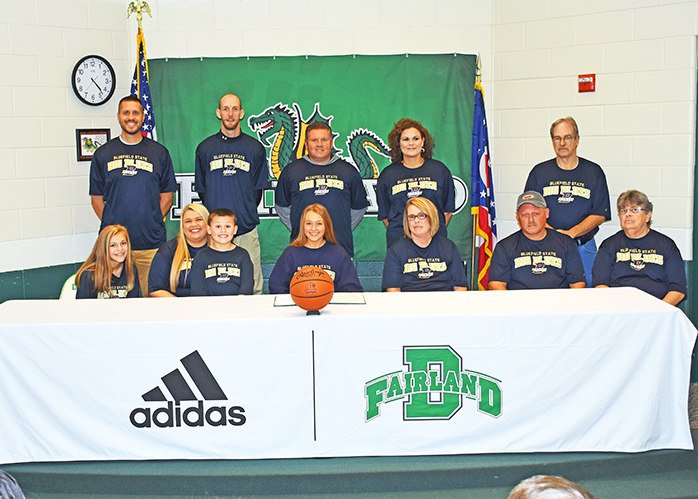 PROCTORVILLE — Harlie Lyons’ shot is giving her a shot at college basketball.
The Fairland Lady Dragons’ senior guard used her long-range shooting ability to earn a chance to play at the next level after signing with the Bluefield State Lady Blues on Wednesday.
“Coach (Ryan) Bailey is a person who won’t promise anything so you definitely have to work for it. And I feel like if I work for it I can get playing time because he likes shooters and that’s what I do best.”
Lyons gave Bailey a taste of what lies ahead when she played some open gym with the team and enjoyed success.
“I shot well that day,” said Lyons with a grin.
Lyons had a long list of potential schools that including Muskingum, Marietta, West Virginia Tech, Salem and Union.
But she said her decision to attend NCAA Division II Bluefield State proved to be an easy one.
“I went there and I knew a couple of people and it just felt like home when I first went there and stepped on their parking lot. Everybody was really nice, everyone got along, everyone talked, it just felt like home,” said Lyons.
Fairland Lady Dragons’ head coach Jon Buchanan had nothing but praise for Lyons and said she has earned her scholarship.
“She’s a super, super, hard worked. Every time we open the gym, even when we didn’t open the gym up, she wanted to be there,” said Buchanan.
“She’s definitely been a leader, especially in our offseason. She’s the one who really pushes herself. She deserves to have success because she really pushes herself and worked hard to improve.”
Lyons echoed her head coach that she has worked hard to improve her game and it has paid dividends.
“My ballhandling is definitely better. With my shot, I have a quicker release now. And, my defense I’ve stepped up a lot,” said Lyons.
Fairland’s overall schedule has been built to help Lyons and others to face good competition and prepare them for the next level.
The 5-foot-5 Lyons was all-district last season when she averaged 11.7 points a game and hit 50 3-point goals.
“It’s going to be a different world completely. I feel like I’ve got to get a little bit quicker on defense, but that’s nothing that can’t happen. I think it’ll be good,” said Lyons.
Although Lyons likes basketball, she is very diversified in how she likes to spend her spare time.
“I usually hunt. I like hunting a lot,” said Lyons who prefers to hunt deer but will hunt rabbit. “Fishing’s fun.”
Lyons plans to major in criminal justice administration and then she plans to become a forensic psychologist.