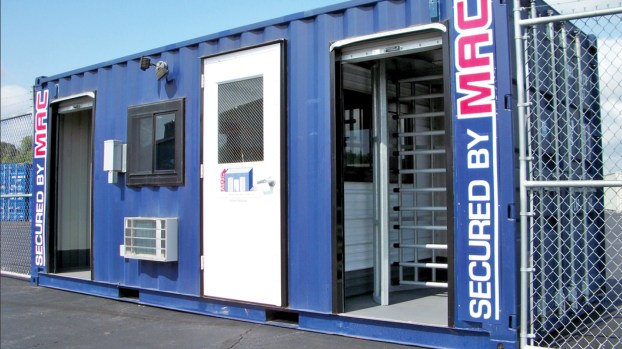 At the center of a years-long lawsuit was this guardhouse that MSSI, Inc. of Ironton has several patents on. A company made a similar product which MSSI said infringed on their patents. MSSI recently won a lawsuit against the other company, Turnstiles.us, Inc. (Submitted photo)

Robert Slagel, owner of Portable Solutions, which includes DropBox, Inc. and Modular Security Systems Inc. (MSSI), was happy to announce that MSSI won a patent lawsuit against a Colorado company, Turnstiles.us, Inc., that was making a product too similar to theirs.

On Feb. 17, 2016, MSSI filed a lawsuit saying that Turnstiles.us, Inc. was failing to recognize multiple patents owned by MSSI.

“I must give credit to the defendants. They were extremely creative and innovative in their quest to find a chink in our patent armor,” Slagel said, adding Turnstiles.us, Inc. ran his company’s patent claims and filings through a myriad of invalidity and other disqualifying attempts and the MSSI legal team was able to quash each of these attempts by Turnstiles.us, Inc. to legally breach the MSSI patent. “For years, I’ve been confident that MSSI had strong patents, but having now run our patents through this gauntlet of legal ‘litmus tests’ gives me immense confidence in our intellectual property position moving forward.”

MSSI makes the MAC Security Portal, a prefabricated, metal guardhouse that have turnstiles to control the flow of people onto job sites and other facilities. MSSI said that Turnstiles.us, Inc. was making similar units that infringed on its patents and had asked the company to cease production.

Last week, the two companies settled the lawsuit and Turnstiles.us, Inc. agreed to stop sales of several of its infringing-access control products, pay MSSI a substantial amount of money, and acknowledged, “… The MSSI Patents collectively cover access control units with (i) structures made of shipping containers, including but not limited to ISO shipping containers; (ii) fiberglass or other plastic structures attached to framed floors made from steel, wood or any other material, and (iii) structures having walls, including solid walls or walls with openings, such as, but not limited to, chain link fence, bars, or wire. (Such access control units are referred to in this Agreement as the “Prohibited Products”) …”

“This litigation did last a bit longer than any of us originally predicted, but throughout the nearly four-year ordeal, MSSI remained on firm legal ground,” said Dale Lazar, one of the DLA Piper attorneys on the MSSI legal team. “As the patent attorney of record who filed the MSSI patents with the U.S. Patent and Trademark office starting back in 2004, I must say that I am proud of the outcome in this settlement. You never really know the strength of your patent work until it is challenged.”

The settlement comes after a nearly four-year legal battle over the patent rights that were awarded to MSSI starting in 2010. The awarded patents cover, among other things, a modular, self-contained access control solution for job sites, construction, military base camps and highly sensitive industrial “soft targets.” MAC Portals have been shipped from the MSSI manufacturing operation in Worthington, Kentucky to customers on six continents. In addition to the U.S. patents owned by MSSI, the MAC Portal is also patent protected in approximately 36 other countries abroad.

As part of the settlement document that was signed, Turnstiles.us, Inc. will transfer non-monetary property in addition to the substantial monetary payment.

NECCO hosted a training in Ironton on Tuesday that was focused on giving workers the skills to aid children with... read more