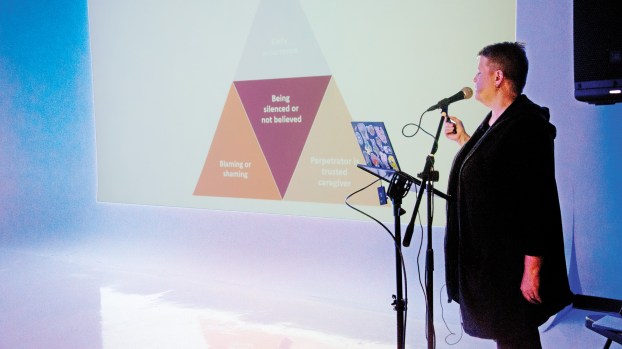 Kim Mayne, of the Ohio Department of Developmental Disabilities, leads a training through NECCO at Mailroom Studios on Tuesday. (The Ironton Tribune | Heath Harrison)

NECCO hosted a training in Ironton on Tuesday that was focused on giving workers the skills to aid children with autism and developmental disabilities issues.

Bianca Sexton, executive director of the foster care company, said that the Ohio Department of Developmental Disabilities, along with the Ohio Center for Autism and Low Incidence have been offering the training through Ohio.

“And they’ve chosen to use NECCO as a pilot,” she said.

She said two representatives, Kim Mayne, from Ohio DD, and Amy Bixler, from OCALI, were on hand for the training, which was having its first of a four-day session.

“They’ve been traveling throughout the state,” Sexton said.

She said NECCO has a history of working with children with DD issues.

“This will enable us to give better care to the children we serve,” she said.

“We’ve been taking care of children for 20 years,” he said. “And, with the news of the DD levy failing, we are trying to be as proactive as possible and be at the forefront for the population of Lawrence County and beyond.”