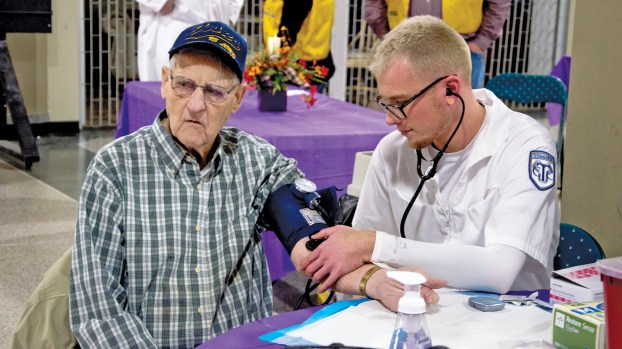 On Friday, several booths were set up, including one from Collins Career Technical Center, where both high school and adult students took part.

“We’re doing blood pressure and blood sugar checks,” Amanda Bentley, who was there with fellow instructor Haley Brown said. Both are from the school’s Coal Grove campus.

Karen Wilson, of Unger Shoes, had a table showing various types of footwear available at the store.

“Proper footwear and proper fits are very important for everyone,” she said. “It’s good to avoid sores on our fit and not having proper fitting shoes can cause them to not heal as fast.”

Dr. William Basedow, of Basedow Family Clinic in Ironton and an organizer of the event, said awareness is important. He was there providing informational packets and talking with those who stopped by the event.

“Diabetes is a systemic disease,” he said. “Not only is blood sugar a problem, but it is a cause of blindness and it produces chronic renal failure.”

He said the Lions Club became involved nationally, at the request of activist and lecturer Helen Keller.

“She wanted us to be ‘knight for the blind,’” he said.

Basedow said the most common is Type 2, in which “the body does not produce enough insulin to control blood sugars.”

He said it is important to get blood sugar checked and that this can lead to detection in a pre-diabetic state.

While there are medications and injections that can help, Basedow said diet and exercise are key to prevention and dealing with a diagnosis.

“These are things that you have control of,” he said.

Defeats incumbent Templeton by three votes CHESAPEAKE — The village of Chesapeake will have a new mayor in 2020. With... read more