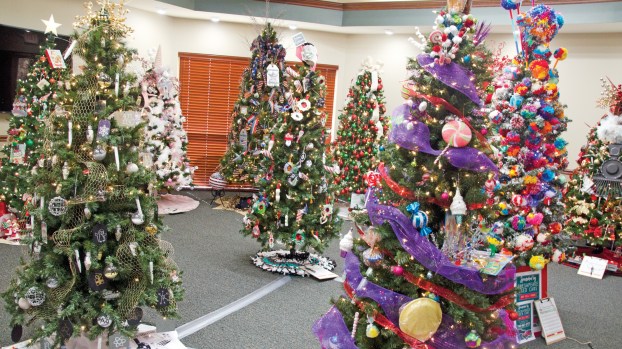 The Lawrence County Chamber of Commerce’s Festival of Trees and Christmas Market, which is set for Friday and Saturday at the Chamber headquarters in South Point, features 24 trees, each decorated by a local school or business. (The Ironton Tribune | Heath Harrison)

Kicking off the season: Chamber’s Festival of Trees and Christmas Market set for Friday, Saturday

SOUTH POINT — “Doesn’t this just take your breath away?” Lawrence County Chamber of Commerce director Shirley Dyer said, as she showed the trees set up for the weekend.

The chamber will be hosting its fifth annual Festival of Tress and Christmas Market on Friday and Saturday at their headquarters at 216 Collins Ave. in South Point.

Dyer said the chamber furnished the trees for the event, which have been decorated by local businesses and area schools. There are 24 in total.

The festival will run from 10 a.m.-9 p.m. on Friday and Saturday and there is no cost for admission.

Today, preceding the event, there will be a 5K Luminary Run through the Point industrial park, beginning at 6:30 p.m.

Friday will feature musical performances from area school choirs from 11 a.m.-2 p.m., as well as other acts throughout the evening.

On Saturday, from 1-3 p.m., there will be Kids Day activities, featuring a show from magician and ventriloquist Gary Booth, while live reindeer and animals from the Good News Llamas will be on hand both days. There will also be train and pony cart rides for children.

Four of the trees in the festival are decorated by local high schools, who will receive 50 percent of the funds from the sale through pre-bids. All trees on display will be up for bids and Dyer said they are always an easy sale.

“We’ve never had one we couldn’t sell,” she said.

She said there would be a People’s Choice award for the best tree in the show, while there will also be awards among the seven trees submitted by second grade classes from seven of the county’s elementary schools.

The event will also feature 14 vendors, including those selling handcrafted Christmas items, as well as food from companies such as the Armory Smokehouse, the Dragonfly Café and Scraggle Pop, with an entertainment tent will be set up as well.

The festival is held in conjunction with a drive-thru live Nativity, presented by Jeremiah 38 Ministries and area churches, which will take place both days from 6-9 p.m.

Dyer said those entering the Nativity will be given either a CD or instructions on how they can listen to the audio presentation for the event on their phones.

Those planning on attending only the Festival of Trees can enter Collins Avenue from the South Point roundabout, while Dyer said those going to the Nativity can enter from the other side by taking the light at the Grandview Hotel from U.S. 52 onto County Road 1, then make a left on Valley Drive into The Point industrial park, where they will take a right after the first two businesses into the Nativity.

“We’ve had wonderful volunteers,” Dyer said of the effort to prepare for the event, which included students from the vet tech and welding classes from Collins Career Technical Center.

She said the trees were brought in two weeks ago and many of the businesses have become enthused about the projects, making repeat visits to add to their decorations.

“It’s been beautiful,” Dyer said. “There’s so much camaraderie and it allows the businesses to network. We’ve had 30 people here at times, working on trees and mingling.”

Two musicians who got their start in the Tri-State are up for music’s highest award this year. On Wednesday, The... read more