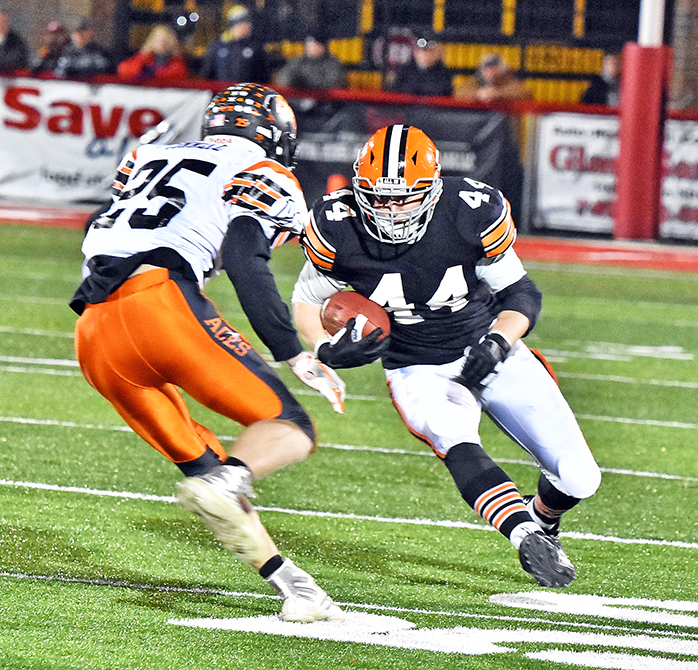 WEST LAFAYETTE — West Lafayette Ridgewood head coach John Slusser admits there is an age gap.
The last time Slusser had any contact with Ironton Fighting Tigers’ head coach Trevon Pendleton was in 2008. Slusser was coaching and Pendleton was playing.
Slusser joked about how old he was because he coached against Portsmouth West in 2008 when Ironton head coach Trevon Pendleton was a sophomore for the Senators. West beat Ridgewood 26-7.
Slusser noted that former Ridgewood standout Evan Jones was a teammate of Pendleton’s at Michigan State.
“(Pendleton has) kept some of the straight-at-it power game mixed with some of the spread and some of the stretch plays and he throws it around a bit,” said Slusser.
“He has a capable quarterback. The Salyers kid throws the ball well. I just think they just choose to dominate up front. I think if they had to they could be alright in a shootout throwing the ball around.”
Slusser and Pendleton will get reacquainted at 7 p.m. Saturday in the Division 5 Region 19 championship game. Ironton (11-1) finished first in the Region 19 computer rankings and Ridgewood (12-0) was second.
Ridgewood used to run a lot of Wing-T offense but is now using the spread and sophomore quarterback Gabe Tingle (5-11, 165) is throwing the ball around the yard. Tingle is 126 of 182 on the season — that’s 69 percent — for 2,573 yards and 29 touchdowns. He also leads the team in rushing with 107 carries for 890 yards and 16 touchdowns.
The offense averages more than 48 points a game and was in high gear last week as the Generals scored on their first five possessions before taking a knee just before the half en route to a 28-3 halftime lead and eventually routing Wheelersburg 42-17.
Tingle was 15-of-22 for 288 yards, four touchdowns and only his third interception of the season.
“We played really well coming right out of the chute. We scored every possession. We gave up some yards, but we made some stands when we had to,” said Slusser.
Ridgewood began the playoffs with an easy 56-20 win over the Portsmouth Trojans. Ironton beat Portsmouth 48-7 the final week of the regular season and handled Wheelersburg 30-6 in the first week of the season.
“In both playoff games we’ve been really good, but this week is going to be different,” said Slusser. “Ironton is really big up front. I think they are dominating in the trenches on both sides. I’ll just be happy with holding our own this week.”
Although this is the first meeting between the schools, the 16-year Generals’ head coach knows about Ironton and its tradition.
“They still do a little bit of that (power formation). They still run double tights with a wishbone look or fullhouse,” said Slusser who has a 145-35 career record.
Ironton has more size and strength than the Generals have seen this season including the backfield led by running backs Reid Carrico (6-3, 225), Seth Fosson (6-1, 235) and Cameron Deere (5-11, 185) as well as quarterback Gage Salyers (6-1, 205).
“Any time you play a team that pounds and pounds, eventually they lull you to sleep and they are able to hit a big one and they have the people who can do that,” said Slusser.
“They have two big tailbacks. Carrico is kid who everyone knows about. He’s an Ohio State kid. They’ve got another one — the (number) 44 kid Fosson. He’s a really nice player. They’ve got a nice fullback (Deere) in front of them. They rotate about four or five backs in there who are pretty good. The quarterback is a big running threat for them. I think he’s a nice athlete.”
The biggest concern for Slusser is how well his team will be able to move the ball against the Ironton defense. Ironton has only allowed 69 points all season.
“And I’m not even talking about the defensive side of the ball which I think they are really, really good at,” said Slusser.
“So far, we’ve had our way offensively with a lot of people. I think this will be our biggest test trying to score against this kind of defense. In the playoffs, eventually you run into these types of defenses.”
The winner of Saturday’s game will advance to the state semifinals to play the winner of West Liberty-Salem and West Jefferson. The two teams played in the regular season with West Liberty-Salem scoring late to win a 42-39 shootout.