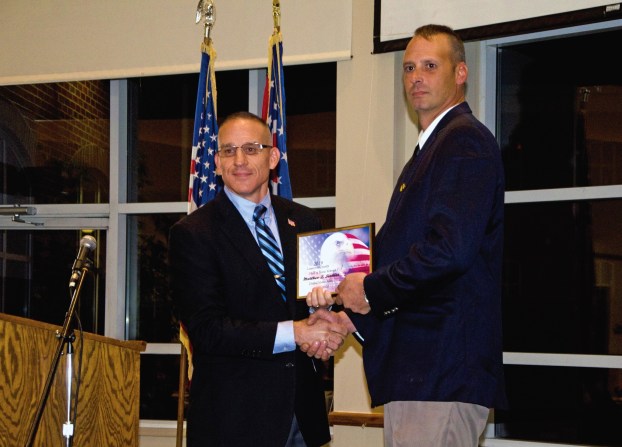 Beyond the call of duty: Jenkins named as first Lawrence County Veteran of the Year

For his military and community service, Matthew Jenkins was named as Lawrence County’s first Veteran of the Year on Wednesday.

The ceremony took place at Ohio University Southern, where Jenkins was honored by university officials and officeholders from around the county.

He currently serves as assistant chief of the Aid Township Volunteer Fire Department, where he works with the junior firefighters and local schools on fire safety. He is also vice president of the Lawrence County Fireman’s Association.

He serves as chaplain and on the honor guard for the Symmes Valley Veterans, VFW and is an advisor for the Arabia All-Stars 4-H Club.

During his remarks, he said one of the key philosophies learned during basic training is to “leave a place better than you found it,” something he said is reflected in Jenkins’ service.

“This is the first time we’ve done this,” Turner, who keynoted the dinner, said. “We looked for a veteran who has served flawlessly this past year and who has continuing influence on the community.”

He said the goal of the committee is to bring public awareness to veterans and form an outreach program to pay tribute for their service.

He said Jenkins exemplified the idea of “servant leadership.”

“His contributions to our nation and our community have been immeasurable,” Turner said.

Jenkins was also presented with honors from the Lawrence County Commission, and the offices of U.S. Rep. Bill Johnson, Ohio Treasurer Robert Sprague and the Ohio House of Representatives, via State Rep. Jason Stephens’ office.

Ironton Mayor Katrina Keith also presented him with a certificate and a proclamation naming the day as Matthew Jenkins Day in the city.

“Not only has he given to our country, but he has also given to Lawrence County,” she said.

Jenkins, in accepting the award, said he had no speech.

“But it’s a pretty big honor to be up here tonight,” he said.

He thanked all the veterans present in the room.

“You always have my back,” he said, and then thanked those aspiring to join the military.

“I thank you for your service that is going to happen,” he said.

It’s only a drill: South Point schools to have emergency exercise

If you see the red and blue lights of emergency responders around South Point schools on Tuesday morning, there is... read more