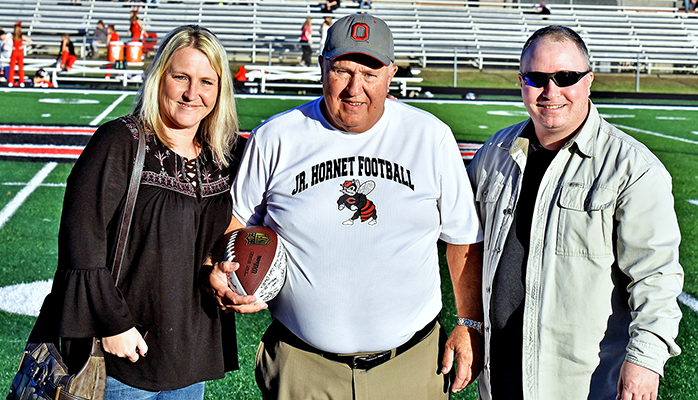 COAL GROVE — During his 40 years of coaching football and basketball, Dave Owens never received a lot of awards or accolades.
But Owens actually got a lot of awards because of all the lives he touched and influenced during that span.
Owens got laid off at the Nickel Plant in 1970. He had taken nine hours in 1969 just to see if he could go through college.
“I was in a class with several of the (Marshall) football players who were in the plane crash. That touches your life every time you hear about it,” said Owens referring to the 1970 plane crash that killed almost the entire football team.
“I got laid off and I asked how long I would be out and they told me it would be over two years. I said, ‘forget it.’ I went to Marshall and it took me about three years. I took a lot of hours per semester.
“I got through and I got the (football) job at Hannan Trace. I didn’t know butter about football. I knew there was 11 on 11 and what a Wilson football or Spalding football looked like. Other than that, I didn’t know much.”
Hannan Trace schedule Ironton’s jayvee and Fairland’s jayvee teams. Dave Lucas was also just beginning his coaching career at Fairland and Hannan Trace beat the Dragons two straight years.
“After the second year, he said ‘If I ever get a (head coaching) job, would you consider going with me. Just a year or two later he got the job (at Coal Grove) and that got me down here. I’ve learned a lot of football from Dave. I’ve learned a lot of football from Bob Lutz just sitting around talking with Bob. If you keep your eyes and ears open and read between the lines, you can learn a lot from these guys” said Owens.
“Everybody has had a part of my life. I’ve been around a lot of schools. The biggest thing is I hope we’ve touched the lives of the students and their hearts will be good for themselves, and their families and the United State. I want them to make the country a better place to live in. That’s all I’ve ever tried to do. The kids are more important to me than the sport.”
Owens joked that he always told the kids if they became millionaires not to forget him at Christmas.
“And they keep forgetting me,” he said with a laugh. “But that’s OK. I love them anyway.”
Owens also coached girls’ basketball at Coal Grove for five seasons and the single-season record of 21-4 still stands.
During his five seasons, the Lady Hornets won an Ohio Valley Conference title and advanced to the program’s only regional appearance.
“I hope they got as much out of it as I got out of them. I appreciate them,” said Owens.
Owens served as an assistant at Coal Grove for eight seasons and the Hornets won six league championships.
Tragedy struck Owens in 2010 when he was diagnosed with lymphoma cancer.
“It was a test. But I said you can do two things with something negative happens to you in life. You can cry about it or you can laugh about it. I tried to smile about it,” said Owens.
“I’m glad it happened to me rather than my wife and my kids or any of my friends. I would take the cancer before letting someone I know have it,” said the 78-year-old Owens.
“Death is nothing to me. I’ve got a lot more years behind me than ahead of me. I know some day I’ll face that. I’m not afraid of death. I know there’s a reward there for me. I don’t want any awards in this life or the next one. I’m thankful for everything that’s happened to me.”
And for the past 40 years, those lives he touched are thankful to Dave Owens.

CINCINNATI (AP) — Andy Dalton could barely protect himself as the Steelers poured through the line, sacking him eight times... read more