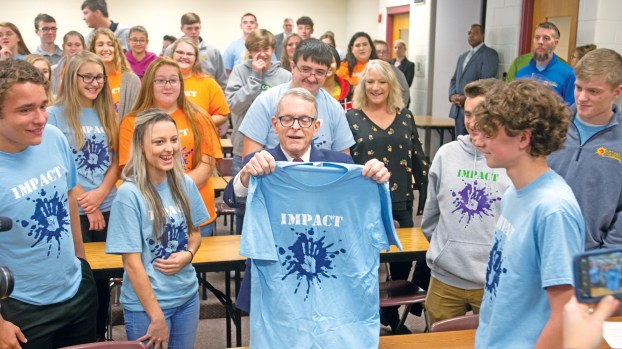 Ohio Gov. Mike DeWine reads the back of the IMPACT Prevention T-shirt presented to him during his visit to Dawson-Bryant High School on Tuesday morning. DeWine visited the school to learn more about the peer-to-peer drug prevention the group is doing in Lawrence County. (The Ironton Tribune | Mark Shaffer)

COAL GROVE — If you happened to be looking towards Kentucky on Tuesday morning, you may have seen an aircraft landing at the Worthington airport. That would have been the airplane of Ohio Gov. Mike DeWine.

A few minutes later, the governor was at Dawson-Bryant High School in Coal Grove to talk to a hundred or so Lawrence County students from Dawson-Bryant, Rock Hill and St. Joseph who are part of IMPACT Prevention, a group that talks one-on-one with kids to help them develop the skills to make healthy choices about drug use.

One of those students was Clay Ferguson, a Dawson-Bryant sophomore.

“I think it was pretty cool the governor would come down to Coal Grove,” he said, adding he was happy to see the support for IMPACT Prevention. “It is just really unbelievable that someone on that level would pick Dawson-Bryant High School to come talk to. I think it’s really special.”

Mollie Stevens, the executive director of IMPACT Prevention, said she got a call on Friday that DeWine wanted to come to Lawrence County. So, the group talked to Dawson-Bryant officials who were happy to host the event.

“I have the students lined up to talk about what IMPACT Prevention has been doing in our county,” she explained. “We must be doing something right for the him to come down here.”

DeWine listened as several students explained what they have been doing, such as meeting with younger students to point out the dangers of drugs.

“It is that kind of student-to-student relationship that I think does in fact make a big difference,” DeWine said.

He said he came to Coal Grove because he felt that he learns better when he gets out and talks to people, rather than just reading a memo.

“I feel it sinks in better when I get out and listen to people,” he said.

At one point, someone named Elaine called the governor, who put her on speaker and explained what he was doing. He then had the crowd say good-bye to her.

DeWine was joined by Ohio Department of Mental Health and Addiction Services director Lori Criss, Ohio Superintendent of Public Instruction Paolo DeMaria, and other members of the governor’s cabinet to learn about their drug prevention programs.

“Now, I am out encouraging people to get involved — all school leaders, school board members,” he said, adding he wants to get them involved in teaching students on all grade levels. “What we know is that the vast majority of addictions and mental health problems occur prior to a young person turning 25. So, we know that this is absolutely crucial.”

After leaving Coal Grove, DeWine went to Norwood and Dublin to talk to students there.

SOUTH POINT — Food pantries, churches and other organizations received a boost on Thursday in their efforts to help the... read more