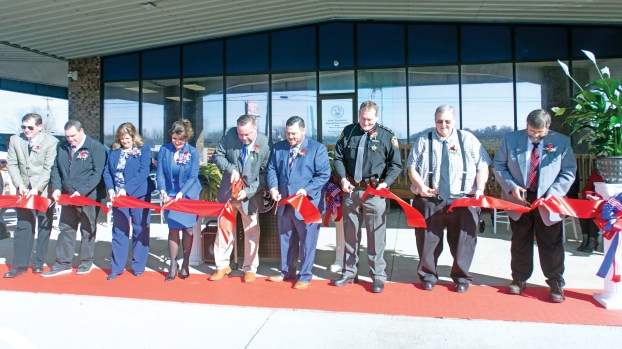 The center is housed at a former car dealership on Lane Street in Coal Grove.

She said it is a former car dealership, the building has a lot of space and it was almost as if it was built to be an operations center.

“It meets all our needs and it has a large room for trainings and meetings,” she said.

As a matter of fact, the commissioners broke the large room in by having their meeting there before the ribbon cutting.

Commissioner Freddie Hayes Jr. said it has taken over a year to get the building ready.

Sheriff Jeff Lawless said it is very important to have all the emergency operations under one roof, pointing out that the space will be very useful for staging operations in emergency situations.

He that his office has not moved in yet, because there are still some things to be done.

“We are going to be moving in the day after Thanksgiving,” he said. “My detectives will move in first, then the clerks.”

He said the 911 Center won’t be moving in for a while longer.

“We have to get the radio tower on top of the hill completed first,” Lawless said. “We are probably still a month out from that happening yet.”

COAL GROVE — If you happened to be looking towards Kentucky on Tuesday morning, you may have seen an aircraft... read more