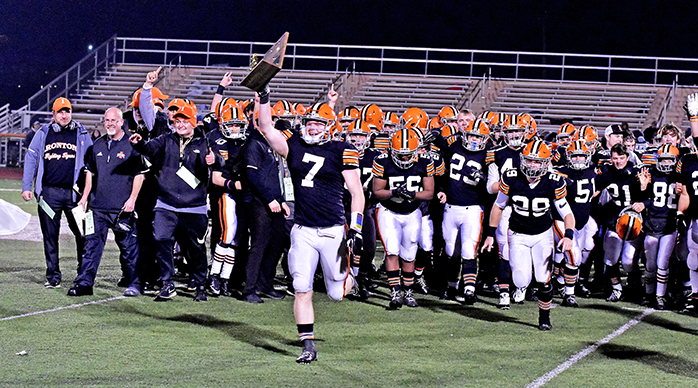 WEST JEFFERSON — When the 7 p.m. kickoff goes into the air on Saturday for the Division 5 state semifinal game, it will mark the first-ever meeting between the Ironton Fighting Tigers and West Jefferson Roughriders.
And although the programs are in unchartered territory, West Jefferson head coach Shawn Buescher is familiar with the Fighting Tigers and the history of their program’s success.
Buescher — a graduate of the University of Rio Grande — has been an assistant at Oak Hill, Westfall, Chillicothe and his alma mater Wellston.
“I have a lot of respect for that program and what they have done. I’m sure their kids are excited and their staff is excited. We’re hoping to put our best foot forward. It should be an exciting night for both communities,” said Buescher.
Buescher who has guided the program to eight league championships (six Mid-States League and two Ohio Heritage Conference) and 10 playoff appearances.
During his 18 seasons, Buescher has a 138-71 record with one regional title and seven regional runners-up.
The Roughriders’ program has had its own share of success. West Jefferson is making its 22nd playoff appearance and won state titles in 1976 and 1982.
The Roughriders have a 26-19 playoff record and this will be the program’s fifth state semifinal appearance. The other four came in 1976, 77, 82 and 2013.
Ironton has qualified for the playoffs 35 times — tied with Cincinnati Moeller for the second most all-time — and is making its 12th state semifinal appearance. Ironton has a 48-32 overall playoff record to go with the two state titles and semifinal appearances in 1973,75, 79, 82, 85, 88, 89, 92, 93, 95 and 99.
Being from Southeast Ohio, Buescher knows what type of football Ironton likes to play.
“They’re very good. I’m very impressed with the talent they have. They’re a good football. To get to this level and be in the Final Four, everyone is good,” said Buescher.
“I’m extremely impressed with what they are in all three phases. Their kids play extremely hard. You can tell they’ve had a lot of success this year. They’re playing with a lot of confidence. It’s everything you’d expect to see in an Ironton football team.”
West Jefferson is averaging more 49 points a game but will be facing an Ironton defense that has allowed just 83 points this season. Buescher knows his team will be challenged.
“I think they are exceptional defensively. I really do. I’m very impressed with their front. They get after the ball. They are relentless in their pursuit. Their linebackers seem to be very good. Their back half of the defense does an excellent job in the passing game, so they are everything you’d think they’d be in a great defense,” he said.
But the Roughriders’ veteran head coach said Ironton is not a one-dimensional team by any stretch of the imagination.
“They have all the components. The thing they do best is they just run to the football and they are very physical,” said Buescher.
“Offensively, I think they do a great job in the run game. They do a great job up front changing at the line of scrimmage and they have running backs that run hard. I’m very impressed with what I see.”
Both teams enter the game at 13-1 on the season and have had little resistance. Over the course the season, Buescher said only one team comes to mind when trying to compare their opponents to Ironton.
Buescher said a lot of teams in their conference run the spread offense, but Mechanicsburg — in the Final Four in Division 6 — is a run-oriented team. West Jefferson beat Mechanicsburg 30-22.
“They don’t get under center as much as Ironton does, but they’re run dominated. I think the closest team that we’ve played to what Ironton tries to do would probably be them,” said Buescher.
West Jefferson had a huge offensive line that will go up against a quick, strong and relentless Ironton defensive front of Seth Fosson, Junior Jones, Nate Cochran, Gunnar Crawford and Dalton Crabtree along with linebackers Reid Carrico and Cameron Deere.
“I don’t want to sound cliché, but when you get to this level, you have to be very good fundamentally. Offensively, we’ve got to be able to handle the relentless effort that they play. From our defensive perspective, and offensively we’ve got to handle their physicality and downhill run game,” said Buescher.
“It comes down for both teams at this stage, who’s going to block best, who’s going to tackle best, who’s going to protect the football You don’t over simplify things, but in the end, coaches talk about when they win or lose, they either did those things well or they didn’t.”